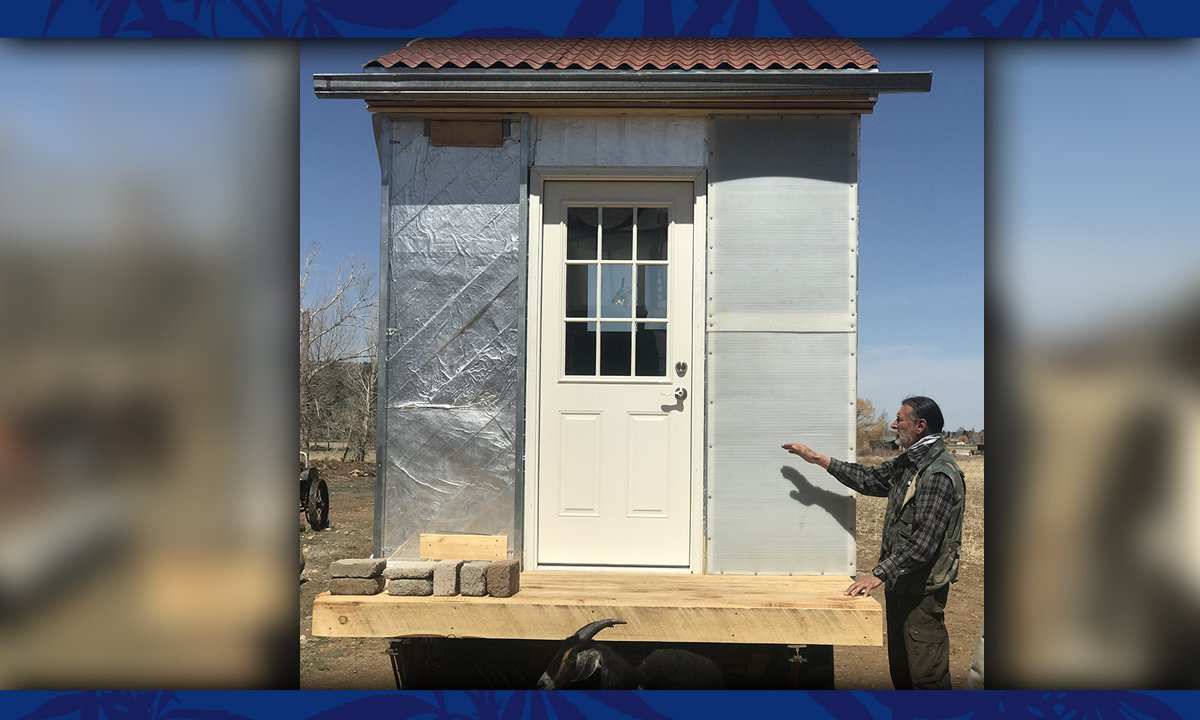 Photo: Hemp farmer and architect Arnie Valdez shows off his sleeper cabin prototype with hemp flooring and insulation at a workshop in San Luis Valley at Rezolana Farm

Builders and designers met on one of the earliest licensed industrial hemp farms in southwest Colorado in late April to learn about adobe hemp construction and create a hemp-based prototype for a small emergency shelter.

The sleeper cabin project is sponsored by the Saint Francis Homelessness Challenge, a nonprofit currently headquartered in Taos, NM, and founded in San Francisco, CA, to address emergency transitional shelter for homelessness.

Semi-retired architect professor and hemp farmer Arnie Valdez of Rezolana Farm designed a small “casita” on a chassis that uses hemp-lime insulation in the floors and walls, Idaho-based HempWool insulation in walls, and flooring made by Kentucky-based HempWood.

The new sleeper cabin design is the second using hemp in the Saint Francis Homelessness Challenge’s collection of open-source cabins that can be used for emergency transitional shelter or as longer term living solutions in rural areas, said Amy Farah Weiss, head of the organization.

The first version of the wheeled cabins, with a rounded roof, won first place for innovation at the Ketchum, ID, U.S. Hemp Building summit last year.

The cabins are built to California state specifications and must provide at least 70 feet of living space with enough room for a loft bed with storage underneath as well as storage and desk space.

“We designed the cabins as triage housing for the street homeless in San Francisco so they could be moved by city services for cleaning. They can be locked so people could leave their things behind and not have them stolen from a tent,” Farah Weiss said. The cabins also can serve as emergency shelter after wildfires.

But the small home also works in rural areas as part of a “resident land stewardship” model of agricultural living, particularly on hemp farms, where temporary agricultural workers can obtain inexpensive shelter, she said.

Valdez has been growing hemp on his multigenerational San Luis Valley family farm since it was approved for research use in 2014. Last summer he built an adobe-hemp brick mini structure on the farm, experimenting with making his own hemp bricks.

Workshop participants made their own adobe-hemp bricks and applied hempcrete to the casita, sometimes observed by curious goats who live on the farm.

Valdez designed the sleeper cabin with embodied energy in mind, purchasing rough-sawn lumber from a local Amish-run sawmill instead of a big-box store, he told Let’s Talk Hemp.

“I felt better that the framing lumber didn’t have the high energy and expense,” he said.

The casita on skids has rainwater-collecting gutters and is completely solar powered for off-grid living.

Workshop participants also got to use Valdez’s homemade hand-cranked decorticator to grind up hemp stalks and separate hemp hurd from the fiber.

Valdez said he believes the “tiny house” movement has been embraced by Americans, especially after the pandemic, who are reconsidering their lifestyle and its costs.

“Small houses are not new,” Valdez said. “But there is a validity to compact housing. People’s consciousness has been changed and they want to simplify their lives and leave behind the big trophy houses,” he added.

“A tiny house doesn’t tie people down because they have fewer possessions and material goods and aren’t tied down by the maintenance of a big building.”

The Saint Francis Homelessness Challenge provides the plans for these shelters free with the hope that municipalities will consider building them for their own emergency shelter needs, hopefully putting to work some local builders, said director Farah Weiss.

“Hemp is exciting as part of this puzzle,” Farah Weiss said.

“There’s the need to care for land and the need to transition from water-rich crops to industrial hemp which requires less water,” she added.

“Resident stewardship creates opportunities for people to learn about and contribute to growing industrial hemp, and helps farmers do that.”