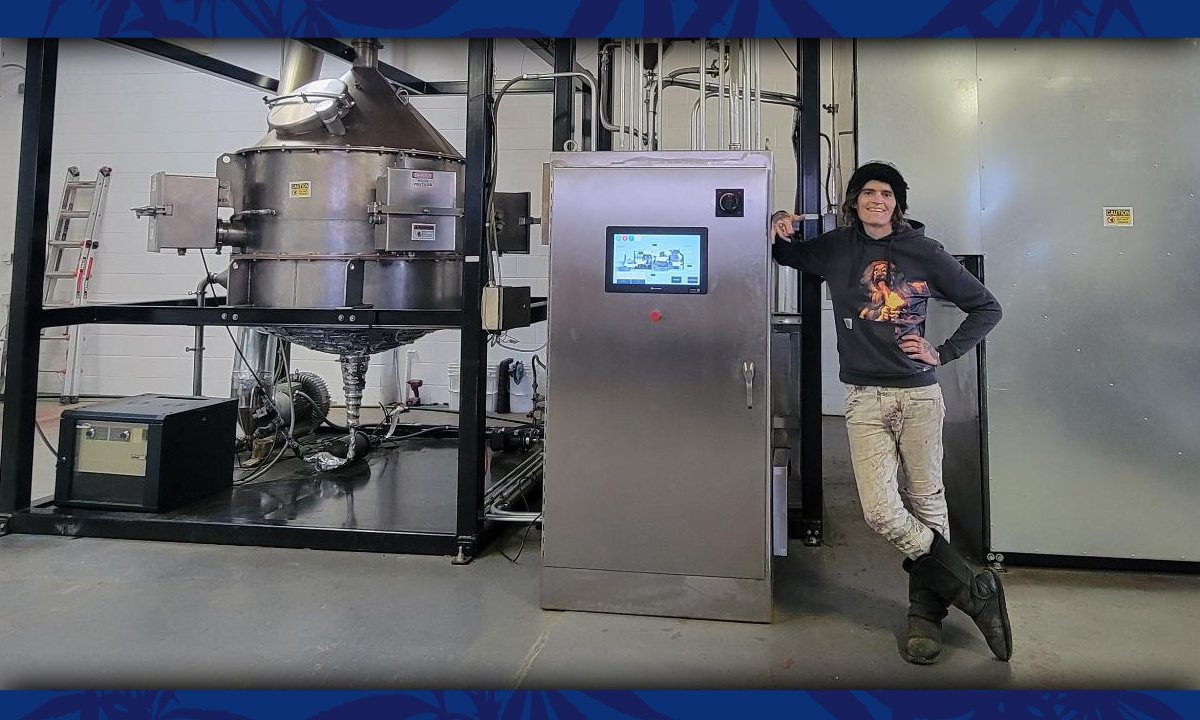 Photo: Jacqueline McGrane, SVP of Business Development at our Vapor-Static installation in Portland, OR

“Peace, love…and chemicals?” asks Rick Bonde. The cannabis industry’s environmental impact always bothered him, he explains. To Bonde, the solvents used in extraction, especially, were sour notes spoiling the harmony of the 60’s-rooted, weed-loving, hippie subculture he experienced growing up in California. So, when his chemist cousin, Steve Bonde, called to tell him about ideas for a solvent-free method of biomass extraction, he jumped at the chance to join him. They developed and patented the Vapor-Static Extraction system and launched Boulder Creek Technologies in 2019.

“The funny thing is, we set out to build a more environmentally friendly process,” says Bonde. “It wasn’t until after building and testing the system, that we discovered the incredible cost savings associated with removing solvents from the equation.” Those cost savings are stunning; the system reduces operating expenses by up to 80%. How? With an extraction efficiency of up to 90%, lower utility costs, zero solvent investment and just one operator.

Smoke and Lightbulbs
During extraction, heated biomass releases vaporized cannabinoids and terpenes. Turning that “fog” back into oil has always been a challenge for the industry. Pondering this, Steve Bonde, a chemist with years working on energy integration systems at the National Renewable Energy Lab, began thinking about other ways to, in essence, get smoke out of the air. His smoky train of thought led him to the pollution control industry and a lightbulb went off in his head.  What if we could use the same process that removes pollutants from the smoke spewing from factories to remove the valuable products created during the cannabis/hemp extraction process?

Steve dove into the world of emission control technology and found that many of the high level scientific papers had been authored by one man, Seattle engineer Steve Jaasund. Bonde called him, and soon, the two were together in Colorado, scribbling on whiteboards, puzzling out how to use the same sort of electrostatic precipitators that capture fine particles from polluted air to remove the cannabinoids and terpenes from the fog created during extraction. Jaasund joined the company as Senior Technology Advisor and he and Bonde developed a system that could revolutionize extraction.

How Does it Work?
Like a giant digital vaporizer, the Vapor-Static Extraction begins by heating biomass for a few seconds to create vapor. Then, it shock cools the vapor stream until it becomes a fog. Next, it takes a radically different turn from traditional extraction. The fog enters the wet electrostatic precipitator and an electromagnetic field pulls the cannabinoids and terpenes out of the fog for collection. Then, the high-quality concentrate is pumped into a collection vessel.

Technology Trifecta
The solvent-free Vapor-Static Extraction method provides safer, more efficient and more sustainable extraction, says Bonde. “Wholesale prices have consistently been falling,” he says, “which has a ripple effect all the way down the supply chain, leaving farmers in a pinch…and if we can’t keep the farmers in business, then we’ve got nothing. Our technology can lower the cost of extraction, allowing the processors to squeeze out a little more, which, in turn, allows the growers to hold firm on their prices.” He hopes the turnkey system can benefit all stakeholders and “rebuild a more equitable and robust industry for everyone.”

Boulder Creek Technologies’ current Arvada headquarters is bursting at the seams as the company grows. The team shares three offices while engineers and technicians buzz around 2,500 sq. ft. of warehouse space that holds shops for building the units, which range from the Lightning 100 which can process up to 100 pounds of dry, ground biomass in 24 hours to the Tsunami 5000, which can handle up to 5,000 and takes “every inch of a flatbed truck” to transport. With 15 employees totaling over 70 (combined) years of cannabis industry experience,  the headquarters also includes a full QA/QC and development lab, a distillation area and a demo Vapor Static system used for constant data collection, R&D and product demonstrations.

Phones have been ringing “off the hook,” says Bonde, who hints at an upcoming major partnership announcement involving a well-known manufacturer that will allow the company to scale up. He ticks off the system’s benefits: “Removing solvents and high pressures allows for a safer work environment.” The highly efficient, continuously operational system requires less energy and just one operator, making it more profitable. And, removing hazardous solvents from the equation is a huge sustainability win.” He’s certain the innovative technology could fuel a green extraction revolution—and Boulder Creek Technologies could begin to transform the industry through peace, love—and Vapor-Static Extraction.

A New Frontier for Hemp: Wildlife Conservation
Family-owned Charleston Hemp Collective on a Mission to Bring Hemp Products to Everyone