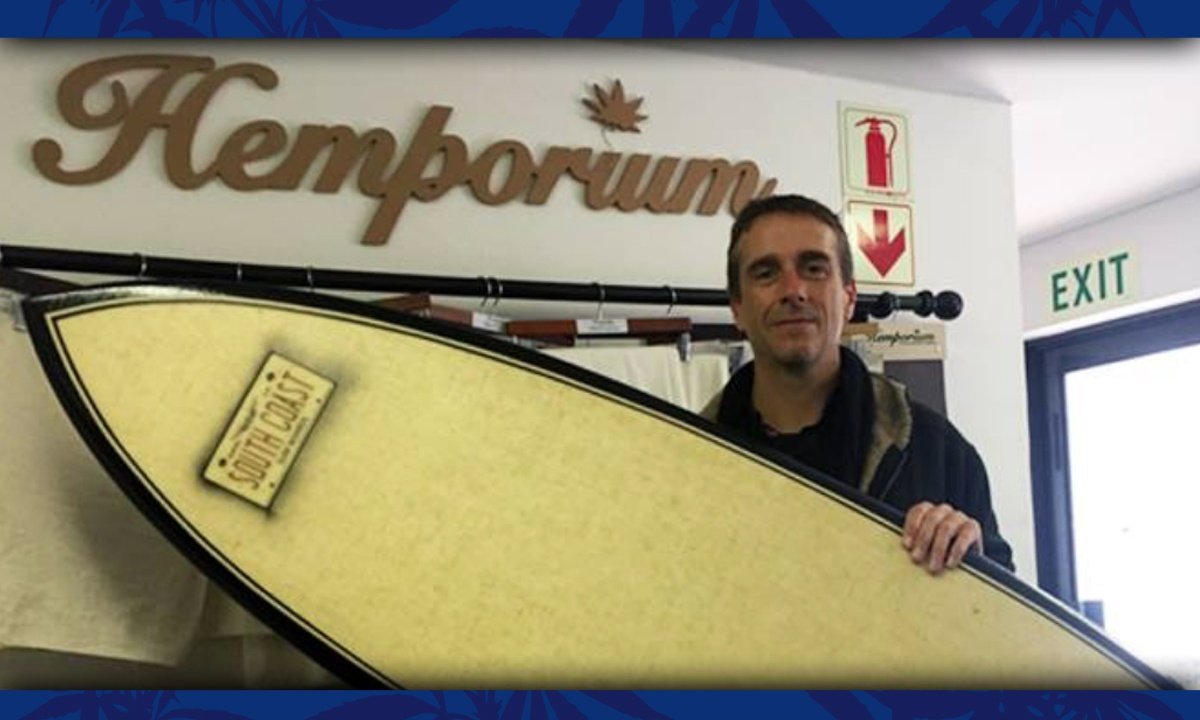 Photo: Tony Budden has sold hemp products from t-shirts to surfboards at his Hemporium shop in Capetown, South Africa

It’s been a quarter century since the Hemporium hemp shop opened in Capetown, South Africa, and proprietor Tony Budden, 47, says he can’t believe how much has changed and how much has, frustratingly, stayed the same.

Budden was a young man in 1996 when he and partner Duncan Parker opened the shop, to “innovate, educate, cultivate” and showcase what the hemp plant could do.

Budden was a featured speaker at the 2018 NoCo Hemp Expo, but he’ll be visiting virtually this year.

The company moved onto other hemp clothing, textiles, fiber products, merchandise and body care products, including, most recently, CBD.

Hemporium imported textiles from China, which had the most sophisticated hemp textile industry, Budden said.

But Budden, fascinated by the plant’s many uses, wanted the South African government to understand the economic opportunities from producing hemp products locally instead of importing.

For five years, his company grew industrial hemp under a government license and submitted research to try to remove industrial hemp from a blanket prohibition for cannabis.

“We never expected it would take so long to get legislation changed, and get the government to wake up to the opportunities of hemp in South Africa,” Budden said.

Budden points out that developing countries look to the United States for cannabis guidance, not because they believe the U.S. has any moral or regulatory superiority, but because they don’t want to endanger financial aid from the World Bank and other U.S. aid programs. No government wants to get ahead of the United States in cannabis legalization and decriminalization and risk losing aid money, he said.

In Africa, Budden and the Hemporium partners have built eight buildings from industrial hemp, including one in a low-income township that serves as a soup kitchen and community food center.

Hemp building methods can directly address massive deforestation in Africa because people in many regions hand-make bricks for building. Workers use hardwood fire kilns to make the clay bricks, chopping down forests to burn for fuel, Budden said.

In contrast, industrial hemp can be grown sustainably. Hemp insulation materials, which are temperature controlling, can be incorporated into buildings, Budden testified to a housing settlement committee for the Western Cape government in 2014.

Hemp protein and oils can also be used to improve nutrition, Budden said this week.

The South African diet for many residents is based on GMO-maize products and sugar. Hemporium’s community food center distributes foods made with Omega 3 hemp oils and hemp protein, improving the diet and health of the people they feed, Budden said.

After 25 years, Budden had some advice for people who wanted to attempt to start a hemp business.

In hindsight, trying to build businesses in textiles, construction, nutrition and body care was “not a good business model,” he said.

“Don’t fall into the hemp trap of trying to do it all,” he said. “Just because the plant can do it all, doesn’t mean you should try to do it all. It’s so tempting when people come to you and say ‘you should make yoga pants, or oats or surfboards,’ and you spend a lot of time with different supply chains and product development,” he said.

“Focus on what you’re best at and grow that,” he added.

For Budden, 25 years has been “a lifetime” in the hemp industry, he said. But he’s seen attitudes change.

His “very religious” parents were skeptical of the business when it opened, but with the acceptance of CBD and the other industrial uses of hemp, they’ve mellowed over the decades.

“My parents sponsored a presentation at their church called ‘God’s Green Gift,’ which was quite a change from ‘The Devil’s Weed,'” Budden said.

Budden said a new chapter in his life is starting with the upcoming birth of his first child in his late 40s.

“Hemp was my first baby,” he said.