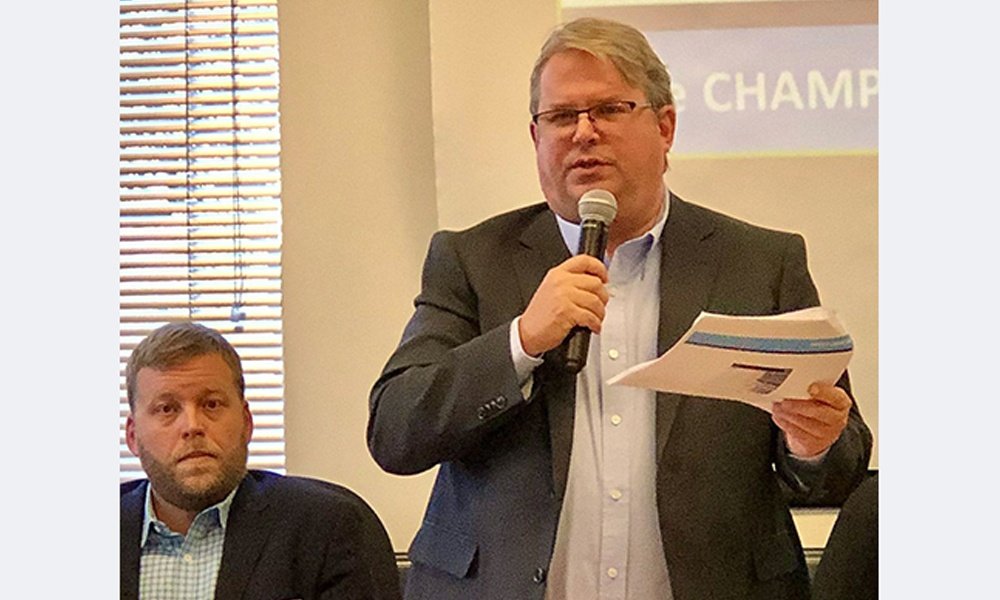 As state and industry leaders sift through USDA’s Interim Final Rule set to govern U.S. hemp production in order to craft a response in advance of the December 30 comment deadline, a number of common concerns are emerging, not the least of which is the rule’s increased potential to place farmers at risk.

The Colorado Department of Agriculture’s Hemp Advancement & Management Plan (CHAMP) initiative welcomed on December 10 more than 100 hemp industry members, advocates, farmers, researchers, academics and others to the agency’s office in Broomfield, CO, for a public meeting to hear comments on the USDA Interim Final Rule (IFR) to establish a national hemp production program and how it affects the state’s own plan for hemp.

The goal of the hearing was to gather comments from the public and coordinate a unified response from the state of Colorado to the USDA in advance of USDA’s December 30 comment period deadline regarding the Interim Final Rule governing U.S. hemp production. In addition, state leaders gathered information at the hearing to help align Colorado’s comprehensive hemp plan with IFR requirements.

The comment letter to the USDA, to be prepared on behalf of the state in coordination with the Colorado Department of Agriculture (CDA), the state’s Attorney General and the office of the Governor, will be signed by Governor Jared Polis and Agriculture Commissioner Kate Greenberg. The response will express the state’s perspectives and concerns as a first mover and leader in industrial hemp regarding USDA’s IFR and its impact on Colorado hemp producers who have already been operating under a well-established, state-managed regulatory system in Colorado since 2014. At issue is where USDA rules differ from Colorado regulations and how the state’s farmers may be subject to increased violations and financial risk from seemingly inflexible federal rules that don’t allow for variation in a young, maturing industry.

To date, the USDA has received approximately 1,100 comments regarding the IFR. Hemp and industry leaders and advocates are urging all constituents to submit comments. “The USDA needs to hear from all of us and there should be 100,000 comments, not 1,100,” said one Colorado hemp farmer commenting at the Colorado CHAMP public hearing. The U.S. Hemp Roundtable prepared a letter outlining its issues with the IFR, and other states including Maine submitted comments to USDA sharing their concerns about USDA’s rule.

Percent of Violations Could Increase Under USDA’s IFR

“The way [the IFR] is written, the percentage of violations could increase. More farmers could be unnecessarily subject to violations,” observed Adam Orens, a consultant with Colorado State University and CHAMP who reported at the hearing on how the USDA’s IFR could impact the state’s hemp producers. “USDA’s set of rules was written for a state with half or less of the total acreage of Colorado. Given the expected scale of production in Colorado, we have concern that public and private investment could be affected as a result of USDA’s IFR on hemp,” he added.

Orens noted that USDA’s IFR will govern hemp for two years, after which a Final Rule will be issued. “The two year interim period allows for a full crop cycle; the 2020 season will be a test drive,” he added.

According to Orens, USDA’s interim rule defines acceptable levels of THC (“with a hard limit of 0.3%”), covers registration for hemp farmers, sampling, testing, disposal of “hot” plants, and enforcement and violations. “The showstopper is that USDA will require 100% of all lots to be sampled, while only random sampling had been required in Colorado,” Orens said. “Plus, the top one-third of the plant is to be tested; it’s not more specific than that. We see a challenge there with logistics,” he added.

Orens added that in terms of percentages of THC content, under USDA’s IFR, “the line is drawn at 0.5%.” “If the crop sample tests at greater than 0.3%, it must be destroyed. If it tests at less than 0.5%, it is not considered a negligent violation. If a crop comes in at greater than 0.5%, that is considered a violation. In Colorado, the limit is 1%, so that is different.” Orens noted that if a farmer receives three violations in one year, a suspension would be issued under the USDA interim final rule.

A concern raised by a number of hemp growers at the hearing was that crop sampling and testing for THC content must be conducted within a very narrow window of 15 days prior to anticipated harvest. Harvest is not allowed until samples are taken and the crop cannot enter the stream of commerce until THC content is verified. Farmers expressed concern that, with the current scarcity of approved testing laboratories, the overwhelming demand for sample testing during the harvest months of September and October would create an impossible backlog, impacting the allowed window for sampling and testing and in consequence, farmers’ harvests. A number of citizens also asked why “hot” crops have to be destroyed and not repurposed into fiber, animal feed, or other uses where the farmer doesn’t have to lose the entire income on his or her crop.

Adding potential insult to injury, just as hemp farmers have been cleared under the 2018 Farm Bill to qualify for crop insurance, USDA’s interim rule pulls the rug out on farmers if a crop tests “hot.” According to CannaLaw Blog, “Hemp with a THC level above the compliance level will not constitute an insurance cause of loss…The lack of crop insurance coverage for hemp that fails testing, when combined with the rules about crop destruction, creates enormous risk for hemp farmers. A farmer may try to do everything right only to end up with an uninsurable crop that must be destroyed and a complete loss of their investment into hemp farming.”

USDA’s rules further require that testing labs be registered with the U.S. Drug Enforcement Administration (DEA). But current DEA rules limit registration to jurisdictions in which medical or recreational marijuana is legal, reports CannaLaw Blog. “Although the number of such jurisdictions is growing, no one in the industry believes that the number of DEA registered laboratories can handle the quantities of hemp being produced by American farmers. This is an area where Congress may need to place pressure on the USDA and DEA to avoid causing a significant bottleneck in the hemp supply chain.”

States Will Need to Adopt Final USDA Rule by November 1, 2020

Brian Koontz, Manager of the Colorado Department of Agriculture’s Industrial Hemp Program, told the public meeting attendees, “We can operate under our existing state plan through October 31 of next year; after that all states including Colorado will need to adopt USDA’s final rule regarding hemp on November 1, 2020.

Koontz expressed the state’s concern that, given the 100% testing requirement, more testing staff will be required and testing labs will have to be certified by the DEA. “About 2,000 acres of hemp were ordered destroyed in Colorado last year, and that was at an average of 25% testing. Given the 100% testing requirement, our concern is that the percentage of crops required to be destroyed may significantly increase, which could adversely affect our state’s farmers,” Koontz said.

Koontz also noted that, whereas the USDA IFR stipulates that hemp growing licenses will not be issued to individuals with any felony convictions, “that rule should not apply to farm workers, drivers and others who are not key personnel,” he said.

“Also, USDA in its IFR did not address certified seed. However, we see this as important, as hemp growers want reliable genetics,” Koontz added, and he encouraged people to submit comments to USDA regarding their concerns and thoughts on certified seed and seed genetics.

Commenting at the hearing, Ed Lehrburger, founder of Pure Hemp Technology and Chair of Colorado’s Hemp Advisory Committee, offered: “When farmers’ crop tests hot, it can destroy hopes and dreams. As such, I recommend that USDA’s definition of hemp be changed. The 0.3% THC limit must be increased to 0.5%. Any hemp crop testing at greater than 1% THC could be considered as ‘noncompliant,’ he suggested.

Speaking on behalf of the Rocky Mountain Farmers Union, Nick Levendofsky, RMFU’s Director of External Affairs, told the CDA and CHAMP officials conducting the public hearing, “We support the issuance of the rule overall as it supports an emerging industry that can help rural farmers. However, dealing with acceptable levels of THC is not something we’ve seen before. Our real concern is that testing could be too costly and may reduce opportunities for rural farmers. Disposal is also a concern. Family farmers should have the same opportunities in hemp, not just venture capital backed operations, and a negligent violation should not be so punitive as to deter farmers,” he commented.

Hunter Buffington, Director of the Colorado Hemp Feed Coalition, wondered if DEA involvement in the hemp program “is another example of government overreach? No other crop has to deal with the DEA,” she observed. Buffington and others also advocated that by requiring testing of the top one-third of the plant “ignores the rest of the plant.” She advocated for testing homogenized samples of the whole plant instead, and also asked that the program make exceptions for research and development. “We want stable and compliant varieties. The rule is written for farmers but not for researchers. An exemption is absolutely necessary to allow institutions to conduct research,” she said.

Jared Stanley, co-founder of Charlotte’s Web, noted that industrial hemp is not just CBD. “The 2018 Farm Bill allows for all parts of the plant,” he reminded the CHAMP hearing panel. Stanley also advocated for exploring the allowance in the program for an export market for U.S. grown hemp. “American hemp was created via this program,” he said. “We need to promote an export market for our hemp so we don’t have to grow hemp in Uruguay just to sell to Europe.”

In summary, says CannaLaw Blog, “Everyone in the hemp industry ought to submit a comment. Submitting a comment is easy: just click here. Note that you can also upload documents, such as prepared statements or other relevant materials.”