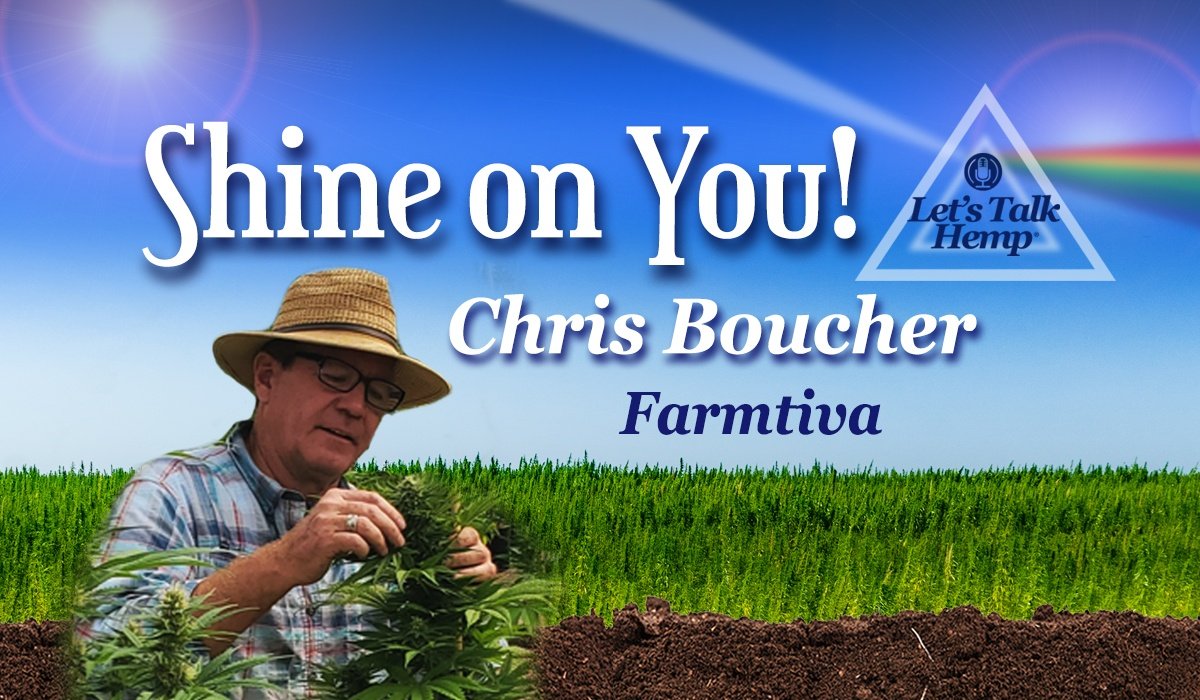 Welcome to my Let’s Talk Hemp weekly industry profile – Shine on You – where I get to feature folks involved in the industry and who are doing important and interesting work from various corners and crevices of the hemp space.  This week I have Chris Boucher, long time hemp industry pioneer and founder of Farmtiva. I’ve known Chris for many years now and consider him a friend and a mentor.  He has been on the front lines fighting for this plant longer than most anyone I personally know and for that I am truly grateful.

Let’s get to know Chris a bit better and why he loves hemp!

Chris Boucher is widely recognized as one the preeminent figures in the American Industrial Hemp movement. In 1994, Boucher grew the very first legal hemp research field in the America in over fifty years at the USDA research Center in Brawley California. The project was documented by CNN and remains a milestone in American hemp history. In 1992 Boucher co-founded the HIA Hemp Industries Association which still exists today. Boucher also co-authored the landmark game changer “Hemp CBD is Legal in All 50 States” back in 2012. This was instrumental in kick starting the US Hemp CBD industry into a billion dollar industry that is today. . In 1997, Boucher’s work with the Navajo Nation in Arizona was instrumental in passing the very first Native American Hemp laws for the reservations.

In 1991, Chris Boucher founded The Hempstead Company, as one of the first hemp clothing and seed business in the US in over five decades. Clients included Converse Shoes, the Disney Stores, The Beatles (for their Anthology Release), The Dave Mathews Band, Phish, Ziggy Marley, the Turner Foundation, the Bob Marley Foundation, Save the Earth Foundation, and the Rainforest Action Network.

Boucher has been growing hemp for over 25 years in China, Poland, Hungary, Romania and the USA. Boucher has also helped draft and promote hemp legislation, some resulting in the first hemp agricultural laws in California, Colorado between 1994 – 2017.

Chris is CEO of Farmtiva inc a seed breeder and industry consultant. He resides in Laguna Beach, California with his wife, and donates his time as a mentor to underserved youth in South Central Los Angeles. He travels the country speaking and consulting on behalf of agricultural hemp, and the new American hemp industry.

When and why did you get into the hemp/cannabis industry?
In 1990 I was in a store in Van Nuys California selling my cotton backpacks and a man approached and asked if I would sign a petition to legalize hemp. I asked him what was Hemp? His name was Jack Herer, and he wrote the book Emperor Wears No Clothes. He explained everything about it and I left the store 4 hours later and my life was changed from that day on.

You are involved in non-profit work, can you tell us about the organization/organizations that you work with and what you do with them?

Debra’s Kids; we mentor kids in S Central LA teaching them life skills and give them childhood experiences, learning to swim, beach activities, camping, school mentoring and consulting and adviser with traumatic life crisis kids in the inner city deal with gang life and violence. We also teach older kids work ethics and how to grow hemp.

What are your favorite products and/or attributes of the hemp/cannabis plant?
My favorite is the food and medicine aspects how it can change the world and feed people and of course, its environmental contribution for food, fuel, plastics, paper and 1000s of other products.

Do you have any current or upcoming projects you’re working on that you would like to let folks know about?
Yes, I recently helped co found a new hemp farming association “Hemp Farmers Guild”, www.hempfarmersguild.org in order to help, protect and inform the small farmers, family farmers, minority farmers, veteran farms and woman owned farms from outside lobbyists and corporations of publicly traded Hemp and Marijuana interests who want to highly regulate the hemp industry in California.

I swore I would never start another Hemp Association after co founding the HIA in 1992, LOL, here I am 30 years later starting a new one.

What legacy would you like to leave for the next generation from your work?
My legacy would be to teach as many people how great hemp is for our country, our health and the planet. Most important is to make sure that hemp history is inserted back into our history books. Also, being known for making CBD hemp legal and a reality.. Never give up on your dreams and aspirations even when people say you’re never going to succeed.

What is your favorite hobby and who are your top 3 favorite bands/musical artists of all time?

About Morris Beegle
Cannabis/hemp advocate and entrepreneur Morris Beegle is Co-founder and President of the WAFBA (We Are For Better Alternatives) family of brands. He is also the producer of NoCo Hemp Expo and Southern Hemp Expo as well as publisher of Let’s Talk Hemp. For additional information on what Morris is up to, visit his website at www.morrisbeegle.com and if you would like to get in touch, drop a message to morris@morrisbeegle.com

New Fund Seeks to Invest $500M in Food and Fiber Hemp by 2030
Shine on You: Let’s Talk Hemp Q&A Profile with Frederick Cawthon