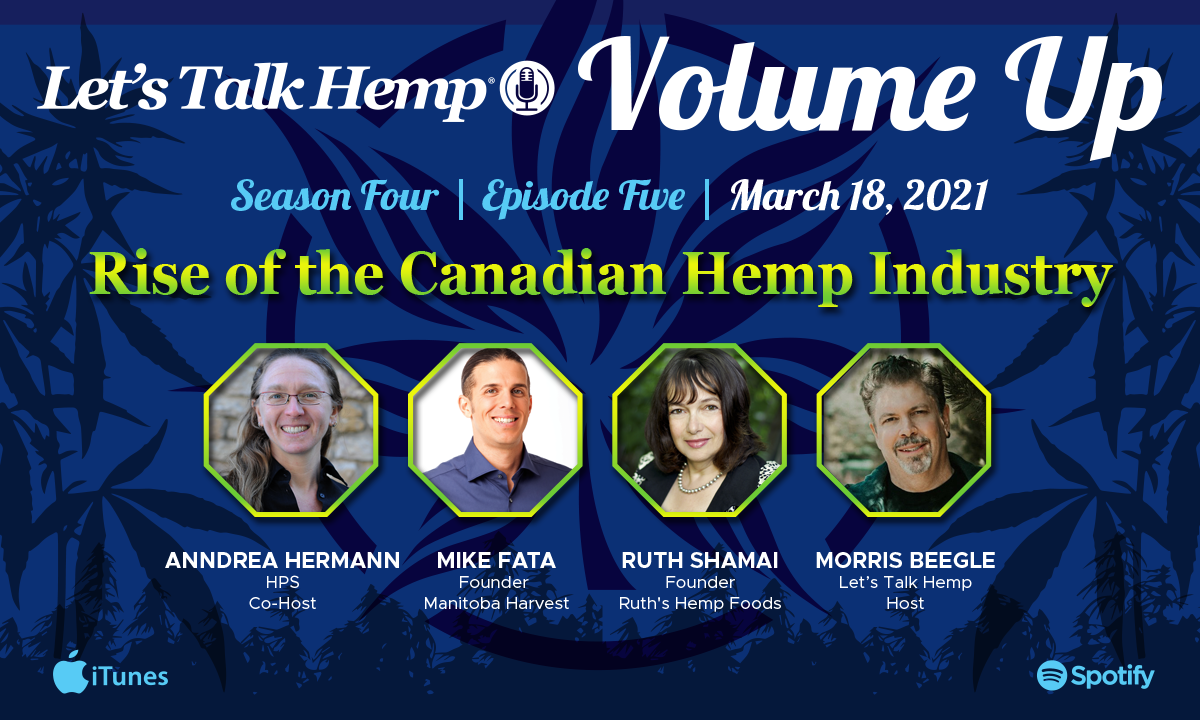 Canada has been at the forefront of hemp foods since the late 1990’s and there is no sign of our friends to the north slowing down anytime soon.  Today, Canada has legal recreational and medical cannabis in addition to being a leading global producer of industrial hemp.  In this episode of Volume Up, host Morris Beegle is joined by co-host Anndrea Hermann of Hemp Production Services along with Rush Shamai, founder of Ruth’s Hemp Foods, and Mike Fata, founder of Manitoba Harvest, as the revisit the early days of hemp becoming legal and the Rise of the Canadian Hemp Industry.

You can Subscribe and Listen to the Podcast on Apple Podcasts. And be sure to leave us a Rating and Review!

Anndrea Hermann, M.Sc, B.GS, P.Ag., Principal The Ridge International Cannabis Consulting, Owner Hemp Technologies Canada, Director of Inside Sales HPS Food & Ingredients, Founder iHempRadio, Instructor OSU WSE266 Industrial Hemp, Canada Authorized Hemp Sampler and Licensee who has advised Industry for 21+ years. President Emeritus & board Hemp Industries Association and Vice President Emeritus Canadian Hemp Trade Alliance. She’s recognized and revered as a true ambassador of the highest caliber. In 2017, Anndrea was the first woman inducted into the Hemp History Hall of Fame and the 2018 recipient of the HIA Lifetime Achievement Award. This plant is part of her final vocabulary by eating and wearing hemp, building & speaking about hemp while sharing knowledge and inspiring others to do the same.

Ruth Shamai is one of Canada’s hemp pioneers, who started working with hemp in the early 1990s. Ruth was one of the people who legalized industrial hemp in Canada, achieved in 1998.

She was also a petitioner in the landmark case against DEA, spearheaded by David Bronner of Dr Bronner’s and won in 2004.  This case is the reason hemp foods have been on American shelves since then, and was critical in the growth of the current hemp industry.

In Ruth’s words, “I recognized early on that hemp is a plant that has tremendous benefits for our farmers, our environment, our economy and our personal health.”

In 2000, she started Ruth’s Hemp Foods.  A values-based company from the inception, all Ruth’s Hemp products were GMO-free, with no refined sugars, synthetic vitamins, or transfats.  She made hemp tortilla chips, hemp burgers, hemp bars, hemp protein powders, hemp salad dressings, and much more. Ruth Hemp Foods’ products were sold throughout North America.  The company was sold in 2013.

Since then, Ruth has maintained a profile in the hemp and cannabis industries, and also consulted to help bring more brands to market.

Ruth’s new company, BioVida, has now developed proprietary, water-soluble CBD powders, AquaCBDTM, made with organic ingredients, (myaquacbd.com).  The three formulations are based on CBD isolate, as well as broad spectrum and full spectrum oils.  Importantly, AquaCBDTM is backed by science: to prove bioavailability and stability.  AquaCBDTM is sold as a branded ingredient, meaning that any food or beverage manufacturer can incorporate it in their product.

Ruth is now also working with hemp fiber, as a team member at Cannasystems (cannasystems.ca).  Ruth says, ‘I have a strong belief in the future of the fiber industry.  There are so many applications, that are superior to their non-hemp analogs.  It’s not as sexy as CBD, but more plentiful, cheaper and with so many industrial applications!  Remembering that the very first (legal) Canadian hemp growers in modern times were growing for fiber purposes, I am thrilled to see the hemp fiber industry flourish!’

“My passion is natural health and my purpose is to help share it with the world.” Mike Fata

Mike co-founded Manitoba Harvest Hemp Foods in 1998. From 1998 to 2016, he ran all aspects of the company as Chairman of the Board and CEO. In February 2019 Mike helped guide the strategic sale of Manitoba Harvest to Tilray for $419 million dollars.

Mike has dedicated over 25 years studying and practicing natural health, starting in 1995 when he made the life changing decision to lose over 100lbs, and go from 300lbs to his current 180Lbs. He has gained an excellent knowledge of human anatomy, diet, nutrition and natural health lifestyle. Mike is a keynote speaker, has been featured on television, radio and quoted in newspapers and magazines countless times regarding natural health, nutrition, hemp foods, organic agriculture and sustainable business.

As well, he has guided Manitoba Harvest to be on the Profit 100 list of fastest growing companies in Canada for 5 consecutive years.

Mike is currently Chief Executive Officer of Fata & Associates, Chairman of the Board of Sol Cuisine, Director (Past Chairman) of the Canadian Health Food Association (CHFA) and investor/advisor to several companies.

Mike is a homeschooling father

Chat with Mike on Clubhouse: @mikefata