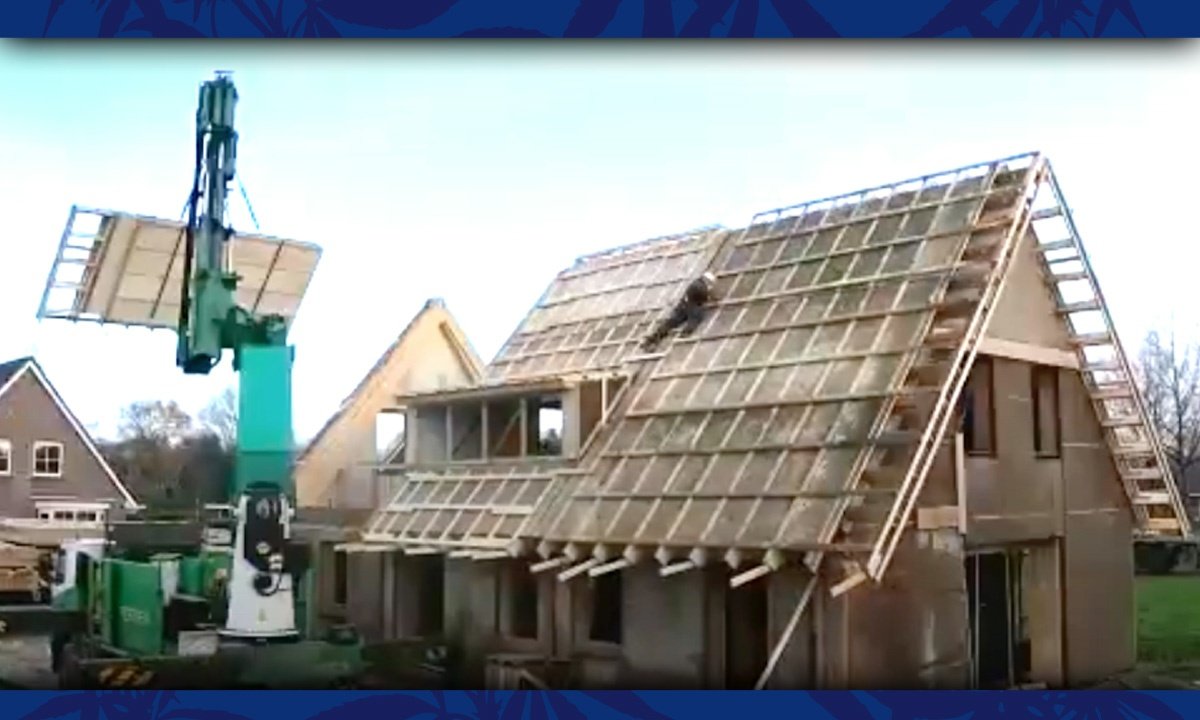 The hempcrete-insulated walls and roof in a prefab hemp panel home from a Dun Agro kit can be built with cranes within 3 days. Photo courtesy of Dun Agro Hemp Group.

Europe’s leading prefab hemp building company, which has built more than 65 specialty low-carbon homes, will stake a claim in the United States market with a large-scale hemp processing facility and headquarters in south-central Indiana. A second location is planned on tribal lands in the western United States.

Although the company hasn’t revealed the exact location, Niki Vandenburgh, Co-CEO and COO of Dun Agro Hemp Group, Inc., said the new US headquarters would be located “in south-central Indiana.”

“Dun Agro’s move is an exciting affirmation that fiber industrial hemp based building products are growing in popularity here in the United States,” said Cameron McInstosh, founder of Pennsylvania-based Americhanvre Cast Hemp in a text.

“It is great to hear about this development,” said Jake Waddell, president of the US Hemp Building Association in a message. “The potential of hemp building in this country is huge and Dun Agro’s decision to enter the market shows the world is taking notice.”

Green Factory Model Planned
The new Dun Agro factory will be modeled on the Dutch low-energy facility that gets most of its power through solar energy. Dun said the new factory would provide economic opportunity to farmers and create jobs. In Holland, the company contracts with 71 growers to cultivate 3,200 acres, according to Dutch magazine Trouw.

“The most important thing is that we have our own chain, our own system from harvesting to processing, producing finished materials ready for consumers,” Dun said.

The US hemp industry is facing a “learning curve” because American agriculture producers are “used to working with commodities,” and not producing the high-profit value-added finished goods, he added.

Dun Agro’s European prefab hempcrete home panel kits are erected by construction cranes in about three days. For the American market, the home designs will be “a little bit bigger, because Americans like bigger houses,” Dun said.

Two showcase homes will be built in the United States from kits shipped from the Netherlands, Dun said. One will be located at the Indiana site and another “near a big city” where the house can be a destination.

The west-coast facility will move more slowly with a few trial crops growing this year through tribal partnerships that the company is not yet naming, Vandenburgh said.

“Dun Agro’s goal is to replicate the facility across the country in multiple locations,” she added.

Dun observed that the expansion to the United States would likely be challenging.

“But you solve the problem by finding a solution. When you want to find a solution, you do it. Dun Agro is strong in finding solutions,” Dun said.