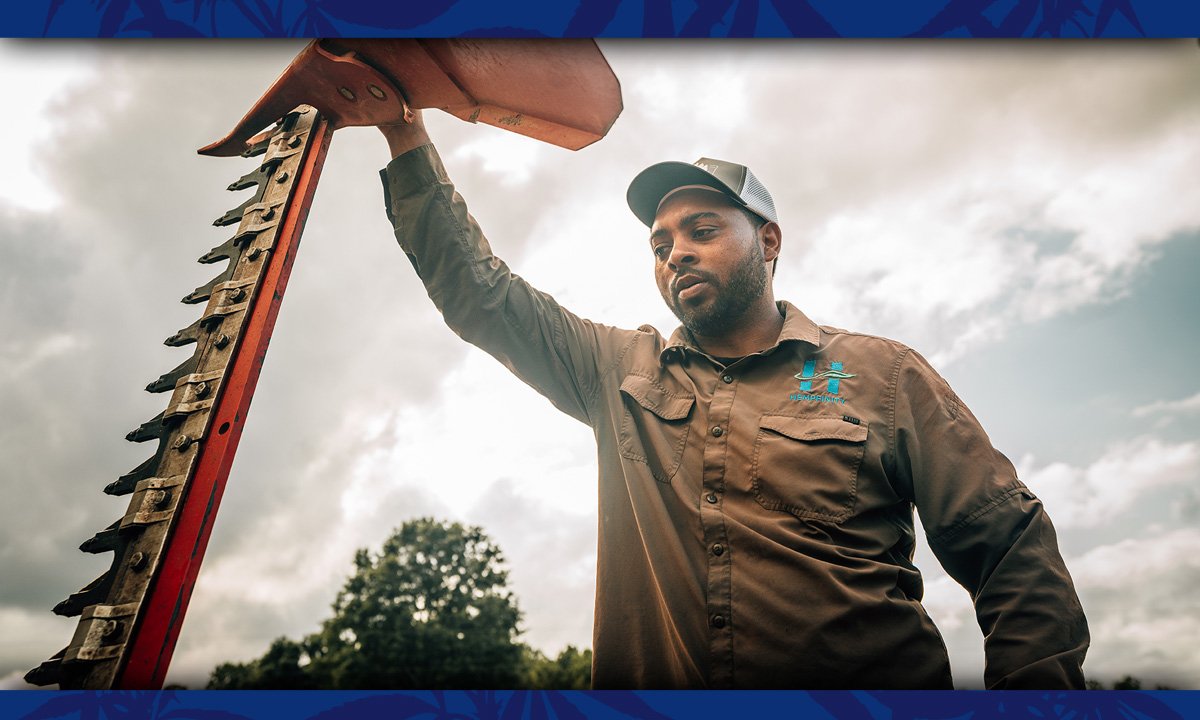 Patrick Brown works on his family's farm in Henderson, N.C., where he began growing hemp in 2016.

Patrick Brown, 40, a fourth-generation Black farmer in Henderson, N.C., considers himself a steward of family land. His great-grandfather Byron Brown was born at Oakley Grove, a slave plantation also in Warren County, and lived there until, as a teenager, he learned the Civil War had ended. He moved across the county, where he worked for pay and became a sharecropper. In time he earned 200 acres of his own land, where he grew timber and raised livestock. By the time of his death in 1931, the farm was over 2,000 acres.

Over the generations, the Brown family held onto portions of the land and continued to improve it. Patrick Brown took over his father’s portion of 165 acres in 2015. Since 2016, hemp is among the crops grown on the farm.

Raised working the family fields, Brown left home to earn a degree in business management, with a concentration in finance, at Fayetteville State University. After graduation, he moved to Washington, D.C., to work with the U.S. Department of Agriculture. He then traveled the world as an agricultural adviser for the United States Agency for International Development, with much of his time spent in Afghanistan.

When his father became ill in 2008, Brown realized it was time to go home. With his years of agricultural experience, he also knew the family needed to focus on growing multiple crops to make a profit on the farm.

After learning about hemp and obtaining a North Carolina pilot program hemp license in 2016, Brown set about growing the new crop and developing regenerative farming practices. On about 18 acres, the family grew hemp to produce CBD for the farm’s own brand of products, Hempfinity.

In 2019 VF Corporation, an American global apparel and footwear company, reached out to Brown through Bear Fibers President Guy Carpenter to ask about using a portion of his farm’s hemp for research for the shoe and clothing line Vans. With a contract to grow hemp in partnership with David Camby of BioPhil Natural Fibers, Brown started growing hemp for fiber and hurd and increased the farm’s hemp acreage from the original 18 acres to over 200 acres today.

Brown is optimistic about hemp’s future for fiber and about his farm’s future in the industry.

“Companies like BioPhil Natural Fibers have stayed with us, stuck with the contracts and compensated us for our efforts,” Brown said.  “As long as we can meet the demand, we can continue to expand and stay in a market that has growth potential.”

With VF, Brown is conducting research trials on seed genetics and other regenerative farming practices for a successful hemp crop. The trials focus on gathering data to make sure hemp can be grown for many years. Brown’s team then evaluates what is viable, with a focus on carbon sequestration to help reduce global warming, while also making sure the crop can work on an existing farm.

Brown notes that hemp can regenerate soil and says he is proud that by focusing on organic hemp practices – eliminating pesticides, herbicides and synthetic fertilizers – he has been able to regenerate his own land.

Brown has another ambitious project in his portfolio.

In 2021, he bought Oakley Grove, the former plantation where his ancestors were enslaved, with a vision to renovate the large house and increase farming on the land.

Patagonia, the apparel company long known for using recycled materials and innovative fibers, learned about Brown’s farm and plantation project and produced a short film about his work.

In the film, Brown tells the story of his family, the farm and the plantation. He also discusses his plans to build a BIPOC farming community and to incorporate a new agritourism line of business at Oakley Grove, including tours, horticulture classes and even barnyard weddings.

Brown notes that people have a negative view of plantations because, at most historic sites, tours focus on the slave owners.

“This gives us an opportunity to tell our story with a positive view,” he said, explaining that, at Oakley Grove, tours will focus on the enslaved people who once lived there.

Brown is looking forward to increasing hemp acreage at his own farm and at others in surrounding states. Long term, he hopes to provide Patagonia with fiber for its clothing.

He also hopes to motivate others descended from slaves to learn more about their backgrounds.

“Everybody has a story,” Brown said, “but not everyone knows where their story starts.”