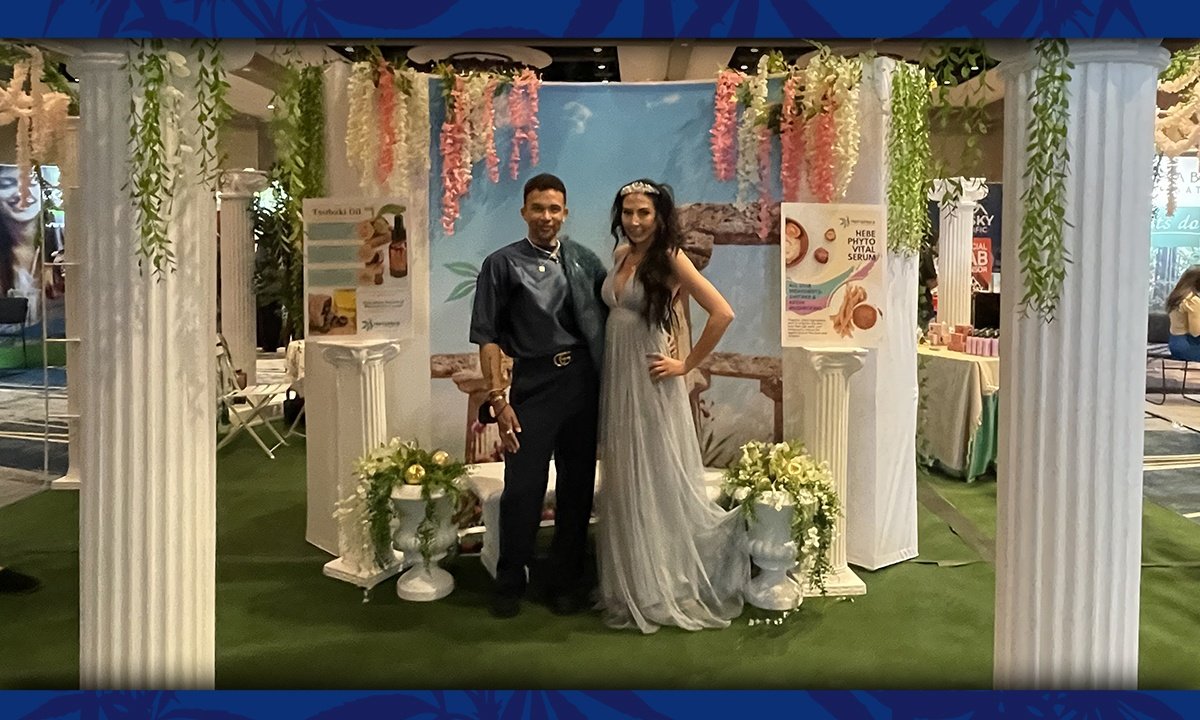 CBD companies are returning to live tradeshows, with some, like Ohio-based HempHera, erecting elaborate displays at the Gaylord Rockies Resort last week. Photo by Jean Lotus

CBD trade shows are coming back to in-person gatherings as vaccination rates for the COVID-19 pandemic have risen. The CBD Expo Mountain took place last week at the Aurora, CO-based Gaylord Rockies Resort, the facility’s first pandemic trade show in 2021.

“2020 was a dry year for us,” trade show organizer Celeste Miranda told Let’s Talk Hemp. “People are so happy to be together and see each other and network again.”

Like March’s in-person NoCo Hemp Expo in Denver, the trade show was staged under COVID-19 county health protocols. The NoCo group will sponsor the Southern Hemp Expo (SHE3) in Raleigh, NC, in September.

Although foot traffic was definitely lower, CBD companies interviewed said they were attending more trade shows than ever in 2021 to make up for lost revenue during the pandemic.

Some companies went all-out on displays, such as the sponsoring Ohio-based HempHera Kosmeticos’s recreation of a Greek temple where CEO Ashley Osborne and associate Paris Ryan displayed CBD skincare products to achieve a “mermaid glow,” with their slogan, “everybody is a god or goddess.”

Denver-based chemist Herb Potthoff of Shimadzu Scientific Instruments said the company was anxious to get back to networking with “a smile and a handshake.”

The company sells scientific instruments that test cannabis for potency and contaminants.

“You can’t empathize with a customer you can’t see,” Potthoff added.

“It’s a great feeling to be slowly getting back to normal,” said Gataka co-founder Joel Dar, who attended with his wife Gila. The two companies are planning a full trade show schedule to attend 10 or 11 events this year, Dar said.

Justin Davis of the Montana-based The Seed Club and Alamosa, CO-based TGC Network said CBD and hemp businesses were seeing “the first uptick in two years,” since the market for CBD collapsed in 2019. Davis was rolling out a new CBD isolate tablet mixed with terpenes that can be smoked, vaped, or eaten.

Delta 8 THC and its uncertain future were on the minds of many participants such as Loma, CO-based Amish Reserve’s Andrew and K.C. who declined to give their last names. The hemp farmers were displaying delta 8-sprayed hemp flower, candies and capsules, which they sell outside of Colorado, because the substance is illegal in the state.

The future of delta 8 is “uncharted”, Andrew said. “Nobody knows. It’s still the Wild West with delta-8” said Andrew. “Nobody wants to go to jail, but right now delta-8 is booming.”

Delta-8, a compound derived from CBD that gives a less intense euphoric experience is popular as “weed light” in states where recreational THC is still illegal. The U.S. Drug Enforcement Agency and more than a dozen states have cracked down on sales of delta-8 in recent months.

Some hemp advocates have suggested that delta-8 be regulated under adult-use THC rules, but the hemp farmers at Amish Reserve said that would be challenging.

Recreational marijuana is grown largely in greenhouses under horticulture protocols, which make it feasible to track legal marijuana from “seed to sale.” That would be much more difficult for hemp.

“You’ve got a hemp farm with 100 acres grown outside, it would almost be impossible to track those plants,” Andrew observed.

For now, delta-8 is still in play, at least for the CBD-Expo group of traveling trade shows. The company will even sponsor a CBD Expo plus delta-8 show in August at Sea World in Orlando, FL.

“The consumer demand is there for delta-8,” said trade show operator Miranda. “We’ll have to see how regulations catch up with demand in the future. It’s an evolving industry,” she added.