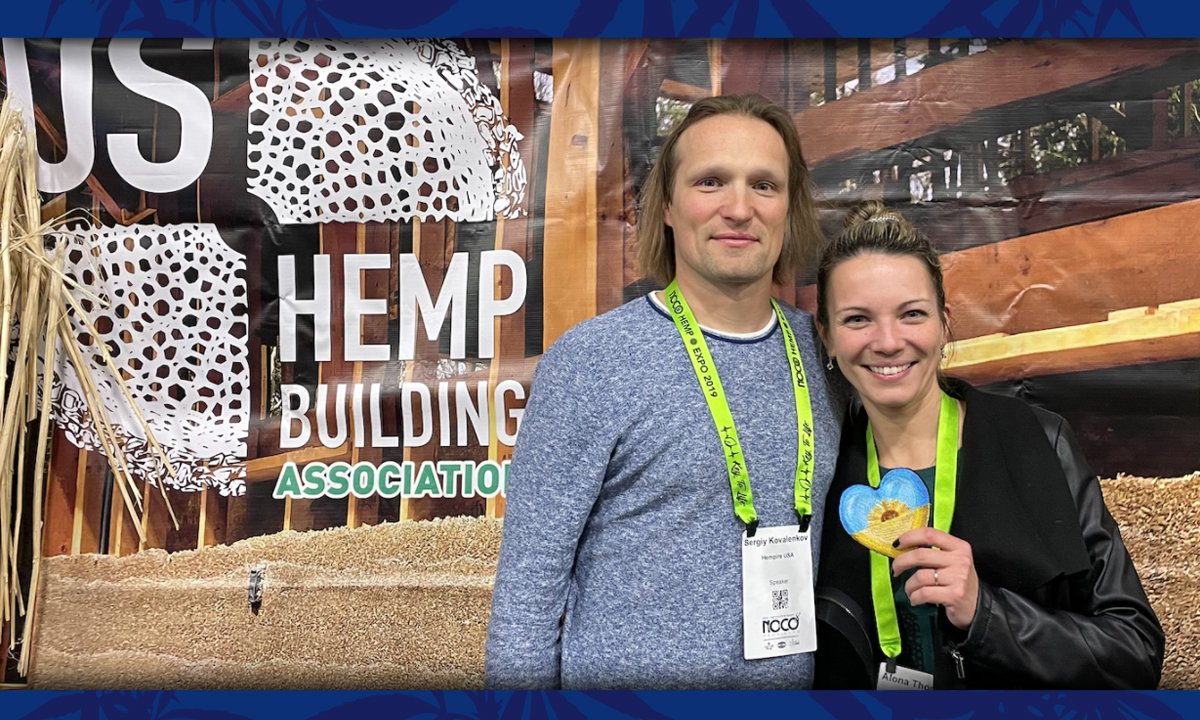 Ukraine’s special place in the global hemp industry has moved into the spotlight during the military invasion by the Russian Army that has caused untold death and destruction.

Ukraine’s history as an agricultural center of Europe includes historic production of hemp. About 250,000 acres of industrial hemp for fiber and seed were grown yearly between 1913-1929. Production fell, but rose again to about 10,000 acres in 2019.

War is ravaging the agricultural output of Ukraine, which is a major exporter of grain and oil seed. Experts estimate more than $6 billion of exported crop losses will result from the Russian military invasion of Ukraine.

“Thank you for this honor,” Kovalenkov told the audience. “The war started with my native city of Kyiv and it’s a disaster for the entire nation,” he said. “Brave men and women are stopping tanks with their bare hands not letting the enemy go through. We are an extremely courageous and brave nation,” he said. “It’s very hard.”

“It looks like we have to rebuild [Kyiv] with hemp,” he added.

Kovelenkov was returning to Ukraine after moving his wife and family to safety in Spain, he told Let’s Talk Hemp.

“The war might turn into a very ugly conflict that will involve many more countries, that’s what I worry about,” Kovalenkov said. He lamented that the city of Kyiv, location of his office and warehouse, was a beautiful “liberal city” that was being pointlessly destroyed with civilians fighting Russian soldiers. “I don’t understand how this could happen in the 21st Century,” he added.

Kovalenkov, who also has an office in California, was a founding member of the US Hemp Building Association. USHBA members organized an informal fundraising drive to help Sergiy move his family out of Ukraine to safety.

Ukrainian Institute of Bast Fiber Fundraiser
Canadian hemp processor Aaron Barr of Canadian Rockies Hemp has organized a GoFundMe fundraiser for a hemp fiber research institute in northern Ukraine that has been endangered by the war.

The Ukrainian Institute of Bast Crops based in Hlukhiv, in northern Ukraine is now under Russian occupation. The institute has grown and researched 50 varieties of industrial fiber-crop hemp for more than 30 years with a staff of four PhDs and 11 research scientists.

“The IBC is reaching out to the international hemp community to ask for help,” Barr said in a statement. “They are hopeful that a ‘Green Zone’ will be set up which will allow them to transport their staff and families out of the occupied territory into a safer region of western Ukraine.

”Once the people are established and safe, a secondary effort will be made to relocate the equipment, technology and genetics that these smart, hard-working people at the IBC have researched, designed and built for generations,” Barr added.

“With the refugees showing up at our door, we are experiencing now what most of the world sees on TV — a drama of mainly mothers with children fleeing their homes in Ukraine, undertaking a horrific, long journey to the borders of neighboring countries to find friendly souls who would help [them] to survive,” Marzenna told the Terre Haute Tribune Star.  More than 2.3 million Ukrainians fled to Poland in the first month of the war and more arrive every day.

Marzenna, who grew up in Poland, lived as a refugee herself as a teenager in Germany before she defected to the West and ended up at university in  Michigan, where she and Kehrt met.

The palace has hosted multiple international hempcrete building workshops over the years. Pre-COVID the palace was run as a bed and breakfast, but now serves as a safe haven for families forced out of their home country.

“We appeal to the hemp community to support us in this effort,” Kehrt wrote. “ Your donation goes to help cover the costs associated with our hosting of mothers and children, as men between the ages of 18-60 must stay in the country to support the war effort. The funds will also be used to transport refugees from the border, to contribute to local food banks and to purchase additional items for other refugees who are being relocated in our local community.“

For refugee placements at Nakło Foundation, click here, and fill in the form; send an email to info@naklofoundation.org; or call Marzenna on +48 602 309 120.