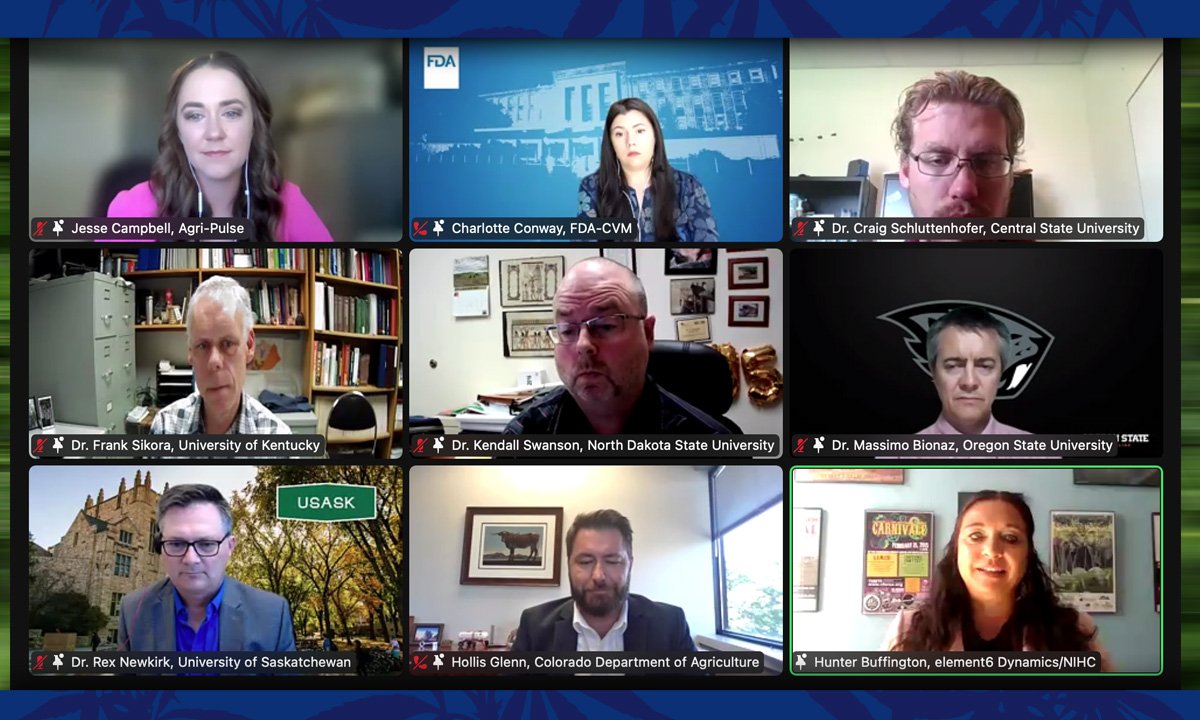 Photo: Panelists participate in the “Why isn’t Hemp in Animal Feed?” webinar sponsored by NIHC and AAFCO.

Hemp ingredients in animal feed still have a long journey to regulatory approval in the United States, said regulatory officials during a “Why Isn’t Hemp in Animal Feed?” webinar August 9. But collaboration and clarity will move the industry forward, panelists said.

More than 700 viewers participated in the online event co-hosted by the National Industrial Hemp Council of America (NIHC) and the Association of American Feed Control Officials (AAFCO). Moderators were Jesse Campbell and Steve Davies, reporters from Agri-Pulse.

Rewards are high for approving hemp nationwide as a commercial feed ingredient in the $83 billion animal feed market. About 6,000 US animal food and manufacturers turn out 284 million tons of finished feed and pet food each year, according to the American Feed Industry Association. As grain and hay prices rise internationally because of supply chain disruptions and shortages, the hemp plant promises multiple benefits in animal feed.

Every part of the plant possesses potential as a feed ingredient. Young stalks could be utilized as a forage with similar feed values as alfalfa. The seed contains valuable proteins and fatty acids (omega 3 and 6) that could be effectively applied through its derivatives, oil and meal. Lastly, the resulting co-products, such as hulls, are nutritionally valuable and must not be wasted.

But hemp’s regulatory path will require approval by the US Food and Drug Administration’s Center for Veterinary Medicine (FDA-CVM) through AAFCO’s feed ingredient definitions pathway to ensure safety, said Charlotte Conway, the agency’s deputy director. Furthermore, cannabinoids must be confirmed to not be a threat to toxicology.

“What we need to understand is that any new ingredient is safe for these target animals and results in maintenance of a safe human food supply,” Conway told webinar participants.

Each species of animal requires a separate approval, Coway added, because,  “we’re looking at everything from a broiler chicken, which may only eat a diet for a few weeks, to cats and dogs that may eat the same diet for 10-plus years.”

It’s not impossible to get a new animal feed ingredient into circulation, as demonstrated by the approval of dried distillers grain and black soldier fly larvae meal, an insect-based protein ingredient, panelists said.

But the regulatory expenses can run up to $250,000 each to approve multiple hemp-based ingredients. Furthermore, approval must be acquired for each species of livestock animal – hogs, poultry, cattle, sheep and fish – and then companion animals such as horses, dogs and cats. The costs are a significant barrier to the hemp industry, advocates say.

Conway did report good news though: The FDA welcomes research from other international feed regulatory agencies, such as the Canadian Food Inspection Agency. Panelist Rex Newkirk of the University of Saskatchewan said he was helping the Canadian Hemp Alliance usher through approval for hemp animal feed in Canada.

Bill Richmond, head of the hemp program for the US Department of Agriculture, said USDA is also granting funds for research into hemp as animal feed through its National Institute of Food and Agriculture office.

“When you start to talk about [researching with] cattle, they become pretty expensive,” said Massimo Bionaz, a researcher of dairy nutrigenomics at Oregon State University.

FDA’s Conway pointed out that some confusion existed because the USDA’s definition of hemp (cannabis plants containing less than .3% delta 9 THC by dry weight) was not connected with whether hemp was safe for animal consumption.

She also said that even though hemp seeds, hemp hearts and hemp oil were deemed Generally Recognized as Safe (GRAS) for humans, that didn’t mean they were approved for animal feed.

Also unique to hemp as a potential feed ingredient is the risk of micro-amounts of residue of cannabinoid CBD and THC in animal feed, the FDA’s Conway said.

But most panelists were only considering ingredients not connected with CBD or THC, such as oil, seed and hay or forage from stalk.

“We consider CBD a contaminant,” when evaluating hemp seeds and oil for animal feed, said Hunter Buffington, of Element6 Dynamics and NIHC.

Nonetheless, cannabinoids have already been introduced into the animal feed supply, which causes confusion, panelists said.

The fact that unregulated CBD is loose in the animal food market is another hurdle for hemp feed, panelists agreed.

Regulators acknowledged that the process to approve new feed ingredients was slow.

In frustration, legislators in some states such as Montana, Oklahoma and others have made moves to approve hemp in animal feed statewide before it was approved federally.

But in order to scale to the big leagues, hemp suppliers must know that manufacturers must have federal approval for each ingredient for each species, to follow the Food Safety Modernization Act, Wilkinson said.

“The current state-by-state approach that’s happening is not good for our industry,” she said. “It makes it very convoluted for our manufacturers because many of them are shipping products across state lines.” She also said manufacturers needed to be confident about scalability “both in [hemp ingredient] consistency and delivery.”

“I know that people think that it’s taking a long time to get these products to market,” Wilkinson said. She said it usually takes “three to five years at least” to get a product through CVM review, but AAFCO and the FDA are responding quicker than usual for hemp ingredients.

“The fact that the hemp industry is getting responses back from CVM in six months is really fast,” she added.

Industry advocates were still frustrated that hemp in animal feed faces such a long and expensive regulatory pathway.

“It is slightly encouraging that the regulators are more open to collaborate,” said Seth Boone, analyst and VP of business development at PanXchange. “What is discouraging is it took states taking hemp feed approval into their own hands to motivate federal regulators towards collaboration,” he said.

“Hemp advocates must not let up at the state level if they want to ensure any progress,” Boone added. “At the least, local approval opens up avenues for currently addressable markets at the state and local level. At the most it will motivate federal regulators to take initiative or be disregarded by the local jurisdictions.”

Hemp Foods for All: Explore the Lineup of Hemp Food Companies at Southern Hemp Expo (SHE4)
Canada’s Hempalta Pursues Innovation in Products Made with Hemp Hurd