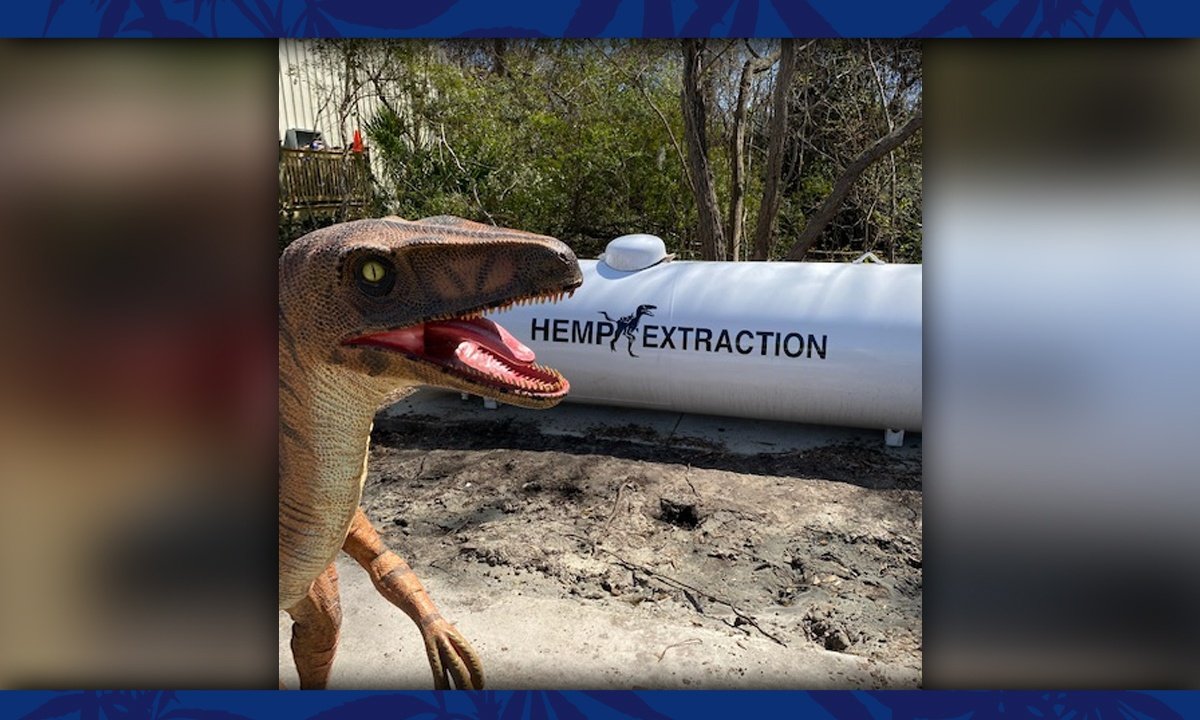 “Rexie,” the velociraptor, signifies the monster-amounts of hemp biomass that can be processed daily at Hilton Head Island-based Hemp Extraction facility. Photo courtesy of Hemp Extraction.

Two new startups are bringing transparency and reliability to the maturing hemp industry for farmers in the southeast United States, the companies said.

Hilton Head Island, SC-based Hemp Extraction, a state of the art, high-volume ethanol extraction facility, has aligned with GRENex, an online marketplace platform, to move the industry forward with high-level processing and support for farmers from seed to sale, founders said.

The new facility is part of a company vision to bring a new professionalism as part of the next stage in the maturing U.S. hemp landscape, he said.

“The biggest thing for us is trying to bring accountability to the CBD industry,” he added. “For us, that’s being truthful, honest and delivering.”

The company also is building for the future, which means designing facilities to operate under cGMP practices that would comply with Food and Drug Administration rules, David Mouser, Hemp Extraction’s marketing director told Let’s Talk Hemp.

Even though the FDA has dragged its feet on regulating CBD, the company is operating to prepare to be FDA compliant, Mouser said.

“We’re eventually going to be running FDA products, and we know what they require to be FDA-approved for organic and compliant products,” Mouser said.

As part of the next generation of hemp and CBD startups, Hemp Extraction has partnered as one provider in GRENex, an online hemp trading platform based on wraparound needs of agricultural producers.

GRENex stands for “Growers, Refiners and Extractors Network,” founder Bob Shinn told Let’s Talk Hemp. The company is lining up a roster of trusted ancillary businesses that assist the farmer along each step of the way in planting hemp and then selling the harvest to the right vetted partners to reduce risk and maximize profits, Shinn said.

“Farmers exit at different stages in the hemp-growing process,” Shinn said. “If they exit too early, their profit margins are heavily impacted.”

A network of trusted partners, from licensing consultants, through genetics companies through processors and advisers, helps farmers lower their risk for adopting a new crop in an atmosphere that has “a tremendous amount of chaos,” Shinn said.

Inspired by online commodities market exchange, The Jacobsen, GRENex wants to provide a virtual “root system” to let farmers “make business decisions in a language and format [they] understand and are happy with,” Shinn said.

The company works by subscription and takes a 2.5% fee off each transaction.

GRENex is starting small with 30 farmers on the platform next fall, along with 72 providers and 180 buyers. Most of the farmers are growing cannabinoid hemp, although a “small pilot group” is growing fiber crops, Shinn said.

Farm producers who were burned in the past few years by a hemp/cannabis culture of chains of brokers and unclear buyers will be able to mitigate risk. GRENEx will even help drafting contracts, Shinn said.

“We help farmers set their goal output for each of their acres, and help them calculate the value of their output,” Shinn added.

Meanwhile, partner Hemp Extraction will take advantage of inevitable “consolidation” over the next few years in the industry, Mouser said.

“Five years from now we’ll have a beautiful industry, with CBD regulated with the same protocols and reliability as other supplement ingredients,” he said. ”That’s what we’ve got to get to. That’s where [large companies like] Coca Cola and Pepsi can buy the product with reliability,” he added.

The company’s mascot, “Rexie” the velociraptor, is pictured grasping hemp in its jaws, to signify the monster 7,000 lbs. of biomass per day that can be processed by each facility.

“We put a saddle on Rexie and say, ‘Jump on!, why settle for less?’” Mouser said.

Hemp Extraction and GRENex will both be showcased as sponsors of Let’s Talk Hemp’s Southern Hemp Expo in Raleigh, NC, on Sep.2-4.