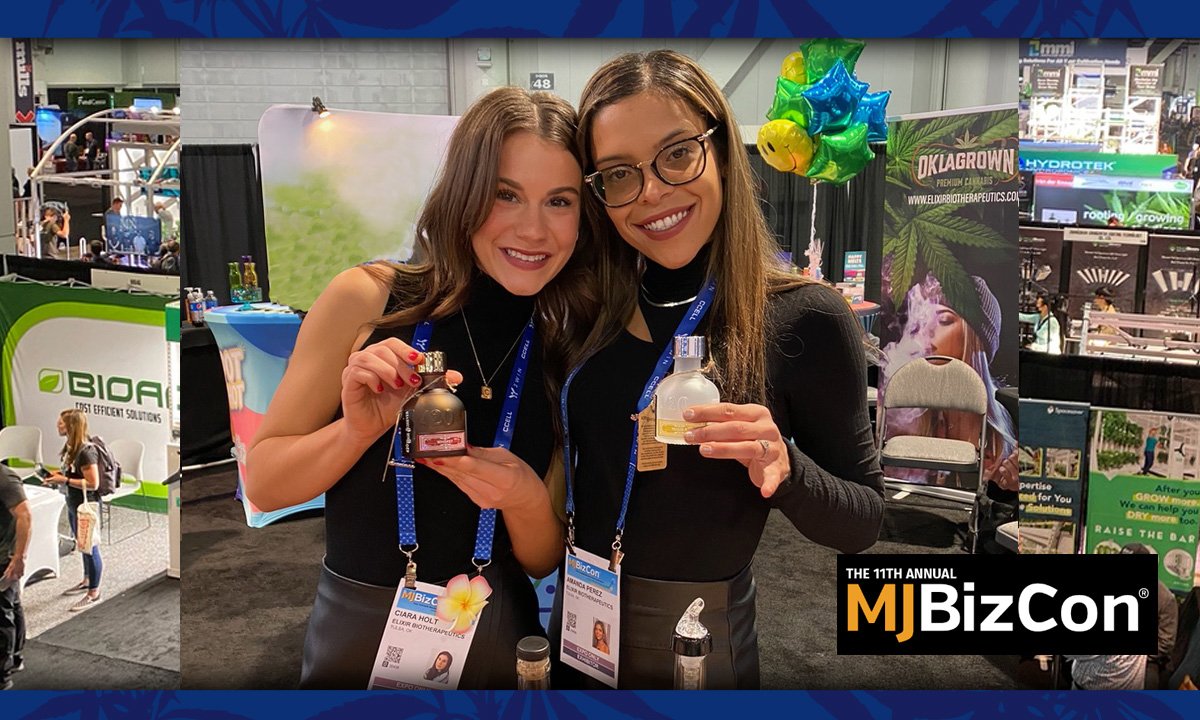 Ciara Holt (at left) and Amanda Perez of Elixir Biotherapeutics were among the exhibitors at MJBizCon.

The team at We Are for Better Alternatives, publisher of Let’s Talk Hemp and producer of NoCo Hemp Expo — recently attended MJBizCon, the cannabis industry’s largest trade show and conference, held each year in Las Vegas.

Participating in a hemp meetup, and interacting with hemp-based exhibitors and advocates among a crowd primarily comprised of marijuana producers, manufacturers, equipment suppliers and more, the WAFBA team was there to promote the many uses of industrial hemp, in addition to the medicinal cannabinoids derived from the hemp plant. According to WAFBA President Morris Beegle, it was important to be there to build bridges between the marijuana and hemp communities, and to explore opportunities where innovation and collaboration can meet.

After several years of economic turbulence, the cannabis industry was resurgent at the Las Vegas event, buoyed by a number of recent events, including an announcement in October from President Biden pardoning certain simple marijuana offenses, legislation introduced in the Senate this past year to end federal cannabis prohibition, and Maryland and Missouri voting on November 8 to legalize cannabis in their respective states. According to the National Conference of State Legislatures, 37 states, three territories and the District of Columbia currently allow the medical use of cannabis products, and as of this most recent election cycle, 21 states, two territories and the District of Columbia have legalized the adult use of marijuana for recreational purposes.

“The tide is turning, slowly but surely” said Beegle. “Now, the FDA needs to get its act together and regulate CBD within a dietary supplements framework, so the hemp-derived cannabinoid market, too, can grow its business, free from an uncertain, unfavorable and unjust regulatory environment.”

As such, Beegle urged hemp and cannabis industry members to back two legislative bills: H.R. 841, the Hemp and Hemp-Derived CBD Consumer Protection and Market Stabilization Act, which would allow the use of hemp-derived CBD in dietary supplements, and H.R. 6134, the CBD Product Safety and Standardization Act, which would regulate the use of cannabinoids in food and beverage products. Both bills are expected to be reintroduced in 2023. In addition, H.R. 6645, the Hemp Advancement Act, expected to be reintroduced by bill sponsor Rep. Chellie Pingree (D-ME), seeks to eliminate overly complicated regulations for farmers, producers and small businesses. “If the hemp industry expresses its voice collectively to our representatives, we can create the regulatory environment we seek, but not without advocacy and vigilance in the coming year,” Beegle said.

As the 2022 event was this editor’s first MJBizCon event, my initial impressions were that the cannabis industry is changing fast, innovation is rampant, and consolidation is expediting. Entrepreneurs, executives, investors and others are building more sophisticated brands and exploring a range of cannabinoids, though the show was mainly about THC. While the first floor of the exhibit hall was focused on products and services geared toward growers, the second floor featured a bevy of shiny stainless steel extraction and processing equipment with advanced technology designed to scale commercial production. With a dynamic tension of “the people’s plant” and patentable invention and innovation on display, the show was … OK, I’ll say it … high energy, and the attendees were in a positive, uplifted and friendly space.

Among the many cool cannabis offerings at the show, what was notable to me as Editor of Let’s Talk Hemp were some of the hemp-oriented companies on display, including Hempak, founded by two young entrepreneurs introducing sustainable, biodegradable hemp plastic packaging to a marijuana industry steeped in petroleum-based plastic packaging; Holistapet, a woman-owned, hemp-derived CBD pet products company; High Hemp, maker of non-GMO, organic, hemp-based rolling paper cones, papers and wraps; Irwin Naturals, a leading natural products dietary supplements brand displaying an array of CBD and THC supplement products; and leading organic food brand Once Again Nut Butters, cleverly marketing its natural and organic nut butters as an ingredient for the edibles market. In addition, I enjoyed networking and interacting with hemp and cannabis industry leaders at a breakfast hosted by Doug Fine, author of American Hemp Farmer, and Andrew Deangelo, co-founder and board chair of the Last Prisoner Project.

Yet, while the show featured the world of marijuana and cannabis, hemp players were in the minority at this year’s MJBizCon. MjBizDaily recently closed its hemp offshoot Hemp Industry Daily and has focused its efforts on the adult use, high-THC cannabis space. Those who are interested in the traditional, low-THC, industrial uses of the cannabis plant, such as food, fiber and environmental applications, can look at the 9th Annual NoCo Hemp Expo set for March 29-31, 2023, at the Broadmoor Resort in Colorado Springs. NoCo is the perfect bookend to the MJBiz show. Both are of great value to leaders in cannabis and hemp, and we hope you’ll mark your calendar to attend NoCo Hemp Expo this coming March.