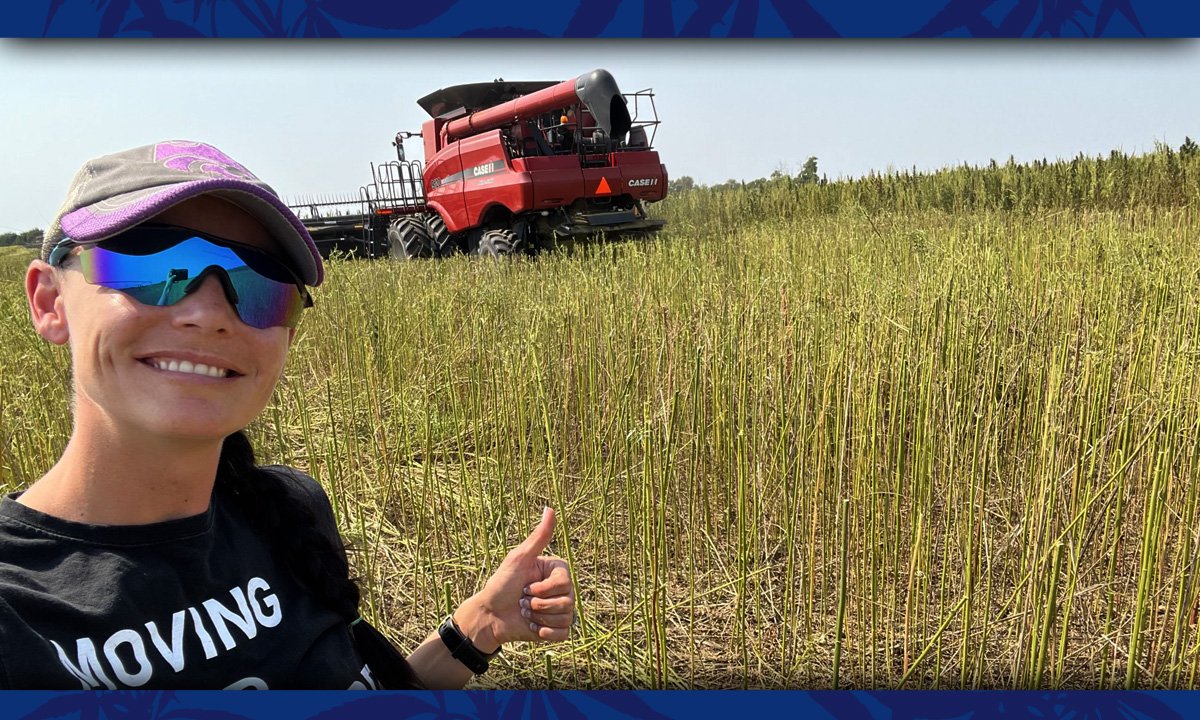 Farmer and crop scientist Melissa Nelson spends a lot of her time on the phone with other farmers, helping them understand how to grow hemp. It’s her job – or one of them – but she doesn’t charge for her services. Her goal is to teach farmers how to grow hemp and to advance the industry in the United States.

Nelson says many of the farmers she works with have been farming for decades and often just need to know how to set the machines to grow hemp successfully. From the farm in Great Bend, Kansas, that Nelson runs with brothers Aaron and Richard Baldwin, fourth-generation farmers, Nelson has educated hundreds of farmers about hemp.

“I strongly recommend you do not bet the farm on this crop,” Nelson says, explaining that it would be irresponsible for a farmer to plant only hemp. To mitigate risk, she and the Baldwin brothers encourage farmers to rotate hemp with other, more traditional crops.

“Farmers do not get to set their own pricing on any crop,” Nelson says. “They are subject to the market and if you have only one crop you are in trouble.”

This is why, in 2018, Nelson and her partners sought to diversify their crops. Prices for their crops – corn, wheat, soybeans and milo – were soft and hemp had just been legalized, she says. They figured hemp would be a natural, with its regenerative properties.

“People think regenerative farming is new, and it has become a buzzword,” Nelson says, adding that farmers have long rotated a variety of crops to sustain the health of the soil. In 2019, Nelson and her partners planted 80 acres of hemp for fiber and grain production. At the same time, they began to research processing – and South Bend Industrial Hemp (SBIH) Processing was born. Today the processing facility runs six days a week for 16 hours a day churning out hurd. SBIH buys hemp tonnage directly from farmers, who get paid right away.

“It’s our job to move that tonnage,” Nelson says. “That way the farmer never worries about finding a home for their crop.” The hurd is going to over 100 clients in bioplastics and hemp building materials, among other applications. In 2022, Nelson and her partners grew 300 acres and contracted just shy of 2,000 more, all of it within six hours of Great Bend.

With a B.S. in biology from Fort Hays State University in Kansas and a master’s in agriculture from Colorado State, Nelson has been a crop research scientist since 2013. In addition to the farm and the processing company, Nelson has another enterprise, Performance Crop Research. The firm contracts with clients all over the world to work on seed variety development (for corn, soybeans, wheat, milo and carmelina), breeding techniques and tissue sampling in the development of insecticides, herbicides and fungicides. Currently, Nelson is doing small-plot hemp trials focused on replicating data, reducing variability and testing for insect and weed resistance, among other things. Yield is ultimately the determining factor in choosing successful seeds, she says.

Nelson and her partners hold growers’ meetings in January and February to “get everybody in the same room, go over the information, answer questions,” Nelson says. Last year, SBIH contracted with 24 farms for their hemp crops and, remotely, helped 50 others grow hemp, Nelson says, adding that her team is devoted to helping advance the new industry.

Nelson says she enjoys bridging the gap between the hemp and conventional farming communities. “The coolest thing is that farmers are not that different,” she says. “We all want the same thing for the Earth.”

Hemp Industry 2023 Opportunities Report: A Rocky Road, but Bright Spots on the Horizon
As NoCo9 Nears, Make Sure You Don’t Fall Prey to Online Scammers