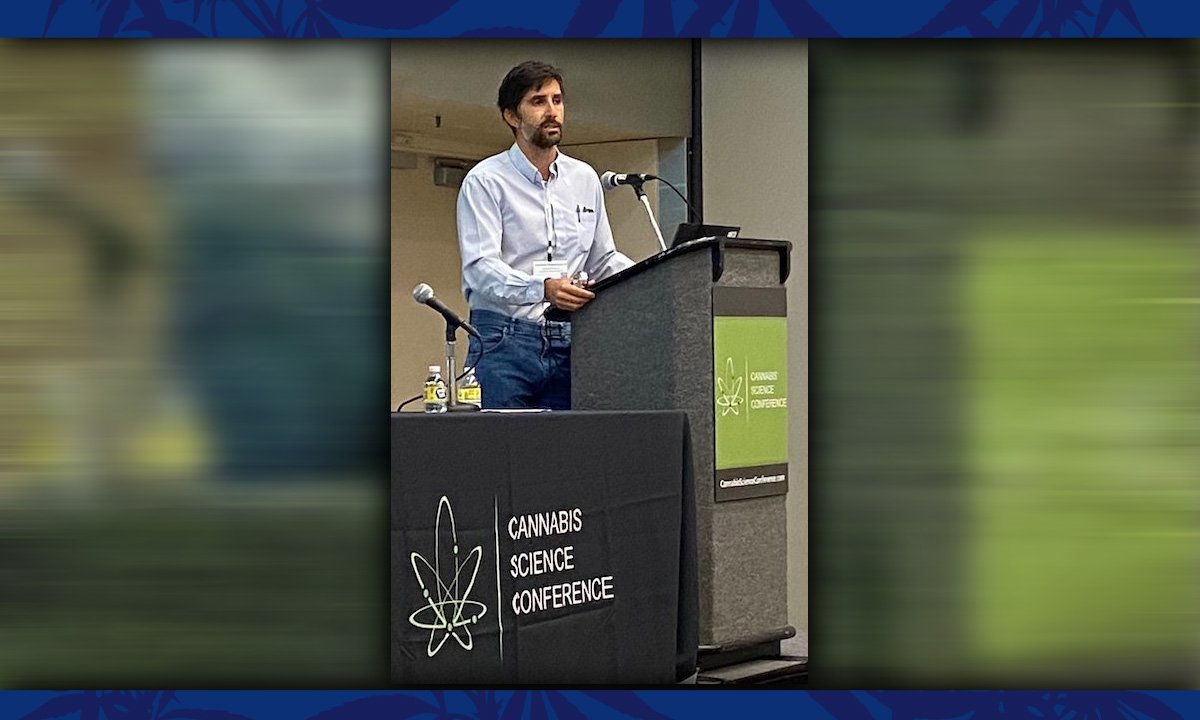 Scientists are taking a greater interest in studying the flavonoids in the cannabis plant to exploit them for human health, said a biochemist at a recent cannabis conference.

These substances, which are abundant across the plant world, give some cannabis varieties vivid color. They also have demonstrated significant therapeutic effects on humans, Dr. Zacariah L. Hildenbrand, a research professor at the University of Texas at El Paso, told attendees of the 2022 Cannabis Science Conference East on Sept. 15, 2022, in Baltimore.

“[Flavonoids] generally serve as pigment elements,” said Hildenbrand. “These also serve as very powerful anti-oxidant molecules and also are showing to modulate the expression of certain cancers. So, there is a lot of value in this class of molecules,” he said. (Anti-oxidants are substances that can help to prevent cell damage in the body; such damage may lead to disease.)

Takeaways
1. Researchers are paying greater attention to the flavonoids in cannabis for their therapeutic value.
2. Cannflavins, cannabis-specific flavonoids, have powerful anti-oxidant potential.
3. While flavonoid concentrations are comparatively small among the compounds in cannabis, a little bit still may offer notable benefit.

Hildenbrand said his university colleagues and he have been examining flavonoids in cannabis for several years, adding that this is “a relatively new” area of research in cannabis circles. “There hasn’t been a tremendous amount of interest,” he said. “My hope is people will start paying more attention to [them] and maybe extraction protocols will start to become a little bit more mainstream,” he said.

Phytochemical Overview
Hildenbrand presented on the first day of the two-day conference held at the Baltimore Convention Center. It featured numerous presentations from academics, testers and health practitioners across four subject areas: analytical cannabis, hemp/cultivation, medical cannabis and psychedelics. His talk was in the hemp/cultivation track. He provided an overview of the main substances, or “phytochemicals,” found in cannabis and hemp. (“Phyto” means “of a plant.” I define cannabis and hemp at the end of this article.) In addition to flavonoids, Hildenbrand discussed cannabinoids and terpenes. The latter two traditionally have been the focus of cannabis research.

In simple terms, while flavonoids provide color (e.g., quercetin: a yellow pigment), terpenes are oils that give a plant its distinctive aroma (e.g., myrcene, with an earthy, musky smell). Cannabinoids are another type of molecules which have demonstrated efficacy in treating human ailments. For example, cannabidiol (CBD), cannabis’s main non-intoxicating cannabinoid, already is a U.S. Food and Drug Administration-approved anti-convulsant.

Flavonoids are resident mostly in the plant’s flower material, whereas cannabinoids and terpenes are found “almost exclusively” in the plant’s trichomes, said Hildenbrand. (Trichomes are the resin glands located mostly on cannabis flowers.)

While Hildenbrand said flavonoid content in cannabis is small percentage-wise compared to substances like the aforementioned CBD, “you don’t need very much to go a long way” in the body. Indeed, “a small amount [of them] works on one enzyme and then that is amplified through this kind of enzymatic cascade,” he said.

Cannabis-Specific
One subclass of flavonoids called cannflavins are specific to cannabis. Hildenbrand said they have “very powerful anti-oxidant potential.” Indeed, back in March 2022, I heard another cannabis scientist say research indicates that cannflavins have “anti-inflammatory properties 30 times greater than aspirin.”

Some varieties of cannabis contain the same flavonoids that give blackberries, blueberries and boysenberries their rich purple and blue colors, said Hildenbrand. They are from a class of flavonoids called anthocyanins. One of his presentation slides listed examples, including cyanidin, delphinidin and peonidin. An online search showed that these anthocyanins have reddish-purple, blue/blue-red and purplish-red hues, respectively. (Zygote Nation previously has covered the significance of pigments in food.)

Hildenbrand said he thinks the best way to consume the flavonoids in cannabis is through fresh juicing of the plant’s buds and fan leaves. “Sure, it’s going to taste like moldy grass clippings, but it is going to be loaded with all these phenols and anti-oxidant properties,” he said. (Phenols are a type of anti-oxidant.)

He mentioned experiments his colleagues and he conducted using different lighting methods. They showed that modulating red light frequencies led to “a significant increase in flavonoid production” in different varieties of cannabis, he said.

Unique Modulation
Moving to cannabinoids, Hildenbrand explained that the cannabis plant has two progenitor cannabinoid molecules: cannabigerolic acid (CBGA) and cannabigerovarinic acid (CBGVA). Through the actions of enzymes in the plant as it matures and outside environmental factors, other cannabinoids emerge.

For example, one of Hildenbrand’s presentation slides traced the transformation of CBGA: Different enzymes in the plant will cause a CBGA molecule to synthesize either into a molecule of cannabichromenic acid (CBCA), cannabidiolic acid (CBDA) or delta-9 tetrahydrocannabinolic acid (THCA). Heat exposure will then cause these new molecules to shed a carbon dioxide molecule—a process known as decarboxylation—transforming them from their acidic state to their neutral form: cannabichromene (CBC), CBD and delta-9 tetrahydrocannabinol (THC), respectively. Further conversions come when ultraviolet light exposure turns CBC into cannabicyclol (CBL) and when delta-9 THC oxidates, becoming cannabinol (CBN).

“The idea that you can modulate the different phytochemicals just on the basis of enzymes, heat, light and oxygen is very, very unique to this plant,” said Hildenbrand.

Researchers have identified well over 100 cannabinoids in cannabis. The two normally most prevalent by far are CBD and delta-9 THC; the latter is cannabis’s primary intoxicating compound. Delta-9 THC has shown anti-inflammatory and analgesic properties, said Hildenbrand. The other cannabinoids normally are present only in tiny amounts, if at all, depending on the plant variety. This is why the cannabis and hemp industries dub them “minor cannabinoids.”

Hildenbrand said he has been working to increase the expression of some of the minor cannabinoids, such as CBC. The amount of CBC normally does not get above 2% by dry weight in cannabis flower, he said. For this work, he said he has genetically modified yeast cells to express the enzyme that causes CBGA to produce CBCA. “We have some promising preliminary data, but … the only way to really push expression of that forward is to do it in vitro,” he said.

Generally, each cannabinoid has a distinct therapeutic effect. “It turns out that the cannabinoids offer a little bit of something for everyone,” said Hildenbrand. For instance, he said, research has shown that cannabigerol (CBG), the decarboxylated form of CBGA, is an effective treatment for gastrointestinal abnormalities; CBC is a neuroprotectant that “could serve as kind of the basis for preventative treatment for neurological disorders”; CBN is an appetite stimulant; and THCA supports vasodilation. Many cannabinoids in their acidic form have anti-inflammatory properties; after decarboxylation, they have different effects, he said.

Robust Therapeutic Effect
There is also the synergistic benefit of taking more than one cannabinoid—or ingesting cannabinoids in combination with flavonoids and/or terpenes, for that matter—to amplify or positively alter the impact. Hildenbrand noted that using THC alone is not a great experience. “But when you put it in concert with minor cannabinoids and terpenes and flavonoids, then you get a much more robust therapeutic effect,” he said. Similarly, studies have shown CBD can modulate THC-induced psychoactivity, he said.

CBGVA is the precursor to the set of cannabinoids called varins. They are found in much smaller amounts in cannabis than the cannabinoids stemming from CBGA. Examples include cannabidivarin (CBDV), which like CBD, has anti-convulsant properties, and tetrahydrocannabivarin (THCV). The latter “has been shown to be an energy and metabolic stimulant,” said Hildenbrand. “Unfortunately, THCV is not widely expressed in the plant. It’s very hard to find plants that are above 1%, by weight, THCV,” he said.

Hildenbrand said researchers have not pinpointed yet what causes a cannabis plant to produce CBGA molecules versus CBGVA molecules.

Cannabis is also rich in terpenes, said Hildenbrand. Forty to 50 types are most prevalent, but researchers have identified many more than that in the plant, he said. “For the most part, they serve as powerful anti-inflammatories and biocides,” he said. (A biocide is a substance plants employ to ward off parasites and pests.) His presentation slides listed terpenes like beta-caryophyllene (gastric cell protectant, anti-inflammatory), delta-limonene (immunostimulant), linalool (anti-anxiety, sedative), and alpha- and beta- pinene (enhanced mental focus). Other terpenes may help to regulate blood glucose or attenuate fatty liver disorders, he said. Unlike flavonoids, terpenes are quite-volatile compounds, he said.

New Frontier of Medicine
Hildenbrand said the “Holy Grail” of his cannabis research is to discover heretofore unknown molecules that may have extraordinary therapeutic value. “My thought has always been that this industry needs to be working on this,” he said. “I believe that the future of medicine is yet to be discovered here from these plants.”

The analytical tools exist today to screen for such novel molecules, said Hildenbrand. ”Then you can do … gene-expression analyses to figure out what these do. … Then you can optimize [them] either through the cultivation cycles … or you can take [a] molecule and derivatize it—kind of the pharmaceutical approach—to then produce maybe a more-efficacious medicine or something that does something totally different,” he said.

The U.S. pharmaceutical industry likely will pour billions of dollars into this specific type of research after the federal government’s legalization of cannabis, said Hildenbrand.

“I think what you are going to see ultimately as this field gets more advanced is … the isolation of individual compounds, then the re-mixture of those in proprietary mixtures for a specific illness,” he said.

Background note: Here are basic definitions of cannabis, hemp and marijuana, as of October 2022:

Cannabis is a flowering plant (albeit petal-less) in the Cannabaceae family, which also includes the hop and hackberry plants. For millennia, cultures have revered the cannabis plant for its healing properties. Today, we know that the aerial parts (i.e., flowers, leaves and stems) of cannabis contain beneficial substances like cannabidiol (CBD) and tetrahydrocannabinol (THC). Unlike CBD, THC is intoxicating, meaning it gives a person a euphoric feeling of being “high” when ingested in sufficient-enough amounts.

Hemp is the U.S. government’s legal term for cannabis that contains those same substances, but with the distinction that the amount of THC in a hemp plant must be 0.3% or less of a sample by dry weight. Growing hemp once again became legal in the United States with the U.S. government’s passage of farm legislation at the end of 2018 following some 80 years of federal prohibition.

Marijuana is the U.S. government’s term for cannabis that it still considers illegal—and continues to police—because it contains THC in amounts that exceed 0.3% of a sample by dry weight. However, many states allow use of marijuana for medical purposes (i.e., so-called “medical marijuana”), and some states have gone beyond that, legalizing marijuana’s recreational, or “adult,” use. The 0.3% threshold in no way reflects an accurate cut-off point between non-intoxication and potential intoxication. In fact, marijuana used for medicinal and recreational purposes normally has THC levels of around 15%, if not higher.

This article was originally published in the Zygote Nation blog.