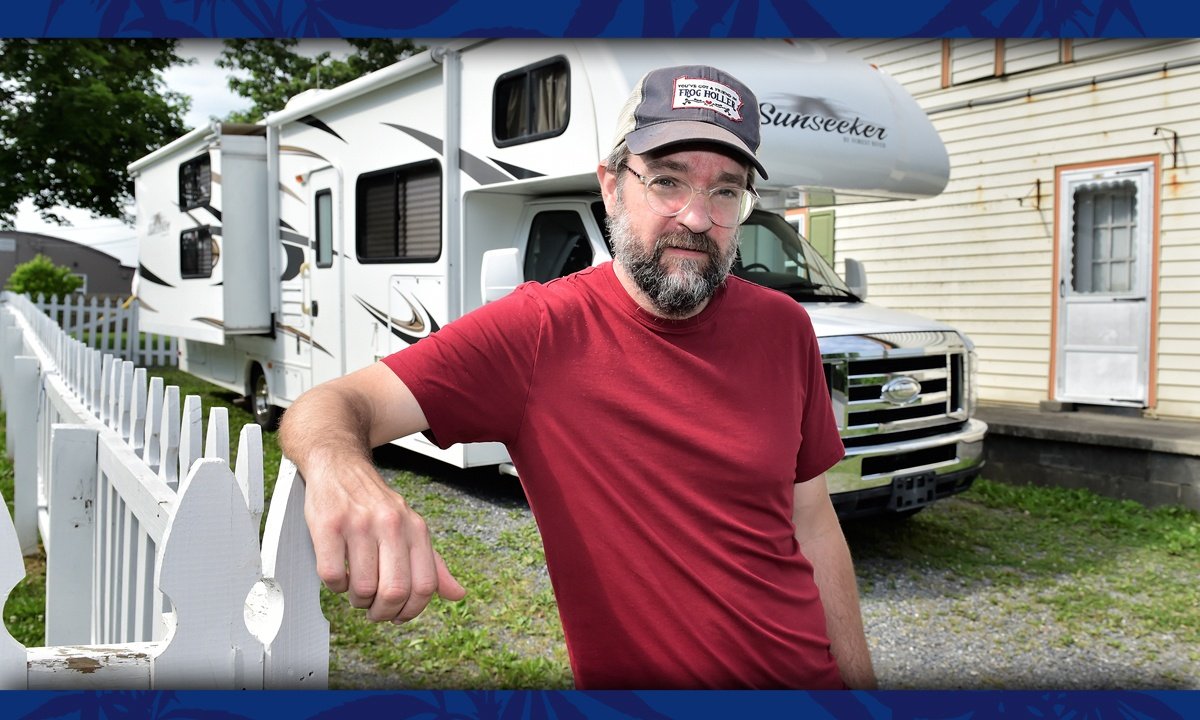 Photo: Lancaster Farming hemp podcaster Eric Hurlock will take a grand tour of the U.S. seed and fiber supply chain broadcasting his podcast from an RV this summer.

Pennsylvania hemp podcaster Eric Hurlock is taking his industrial hemp show on the road this summer. Hurlock, the hemp reporter for Lancaster Farming newspaper, will load his family into an RV and take off June 30 for a six-week road trip visiting hemp businesses in the fiber and grain value chain across the United States.

“My job is multifaceted, I’m here to tell the stories of hemp nationwide in the fiber and grain supply chains,” Hurlock told Let’s Talk Hemp. “But I’m also sort of an ambassador for Pennsylvania’s hemp industry too.”

The tour will kick off at Penn State University’s research farm in Lancaster County with a special event featuring Russell Redding, Pennsylvania’s pro-hemp Secretary of Agriculture.

On the road, Hurlock will broadcast from a mobile studio in the RV touring farms and businesses in multiple states for the leading weekly agricultural newspaper, with a print circulation of about 65,000,  that serves the northeast U.S. and mid-Atlantic states.

“We’ll show up at a farm, they’ll show us around, and we’ll sit down and talk,” Hurlock said. Hurlock’s wife and two daughters, ages 10 and 12, will come along on the adventure, which will include family camping weekends and a possible side trip to Yellowstone National Park, he said.

The Lancaster Farming National Hemp Tour 2021 crowdfunding campaign to raise $3,000 for RV rental and gas has already raised 79% of its goal.

The tour will  start in North Carolina, visiting the hemp textile growers and then continue through Kentucky with a visit to Carrollton, KY to tour Victory Hemp foods and the Murray, KY,-based HempWood factory. The tour will continue, visiting Tiger Fiber Hemp in St. Louis and then tour the South Bend Industrial Hemp facility in Kansas.

In Colorado, the tour will visit Denver and then head to Fort Collins to visit New West Genetics and play hemp guitars at Silver Mountain Hemp, he said.

Hurlock says the Lancaster Farming platform reaches lots of agricultural producers who want to know about the uses of hemp outside of CBD and its medical uses.

“I use CBD myself, and we hear a lot about the Green Rush, but the future of hemp goes far beyond that,” Hurlock said.

“The slow burn is the fiber and the grain,” he added. “So many people who weren’t following the cannabis and CBD industry have slowly become more aware of hemp.”

Lancaster Farming’s reach brings hemp to the people who will be the bedrock of the U.S. hemp revolution as the plant is rediscovered after 80 years of U.S. prohibition — agricultural producers.

Hurlock said he first became aware of hemp’s promise decades ago, “reading Jack Herer’s book [The Emperor wears No Clothes] sitting on a porch in Boulder.”

But it wasn’t until he reported in 2017 on Pennsylvania’s Rodale Institute’s four-acre experimental industrial hemp grow that hemp’s potential struck him.

“I just saw the future,” Hurlock said. “It was like a vision.”

“You need an answer 20 years from now, when your kids ask you, ‘What were you doing about climate change?’” he said.

The Industrial Hemp Tour will visit the Pacific Northwest and some hemp farms in Oregon, and then travel East again to Montana, where they will stop to tour Fort Benton, MT-based oilseed and fiber company, IND Hemp, and visit the company’s new decortication processing facility that will process up to five tons of hemp per hour and support 30,000 acres of industrial hemp production within 200 miles.

The tour will continue to South Dakota, where they’ll tour a Rapid City hemp recording studio insulated by Pennsylvania’s Americhanvre Hemp, then visit Nebraska and the harvesting supply company Bish Enterprises and Desmet Ballestra seed drill press company, with a University of Nebraska meeting in Lincoln with members of the Hemp Feed Coalition.

The tour will end in Pennsylvania at the New Castle, Project PA Hemp Home, a single family home insulated with hempcrete.

Hurlock said Lancaster Farming’s hemp podcast has “taken over my life in the best possible way.”

The podcast was named a finalist in the Best Use of Audio category for the 2021 Global Media Awards presented by the International News Media Association.

As a journalist, Hurlock said he came to the realization that “hemp is the biggest story of the century,” he said. “You never see an industry just develop out of nothing.”

Hemp is capturing the national imagination “because it’s a redemption story,” he said. “This crop was outlawed and vilified during the Reefer Madness era, and now here it is coming back and it’s going to save the world.”

You can follow along on the adventure at lancasterfarming.com/hemptour.