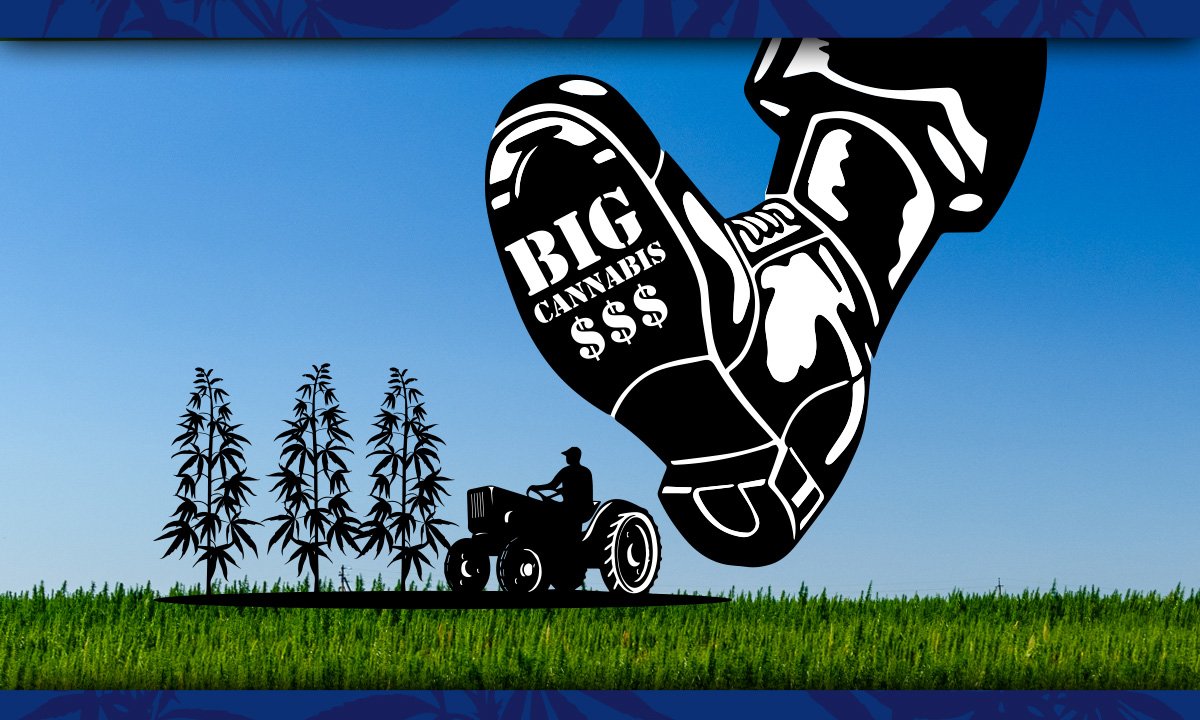 Duped By Big Dope: How Big Cannabis’ Attack on Hemp Has Cost the Fiber and Grain Industry $20 billion a Year

Big Cannabis Is Deploying Massive Resources To Attempt To Deny Hemp Access To Legal Markets
The price of both hemp biomass and processed hemp goods have collapsed since 2019, falling in some instances by 97% by the end of 2021. If that was not bad enough, the hemp industry is now facing extreme pressures from another source: Big Cannabis. Using their deep pockets and national law firms, Big Cannabis is lobbying regulators and legislators in an effort not only to reduce their competition, but to destroy it completely by denying it access to legal markets.

Public Safety Or Simply Competition?
The most common narrative coming from Big Cannabis is that hemp-based cannabinoids are a massive public safety issue. However, when pressed for details or any data on this topic Big Cannabis and the law firms representing them, quickly shift the narrative towards fairness and unregulated competition instead of public safety. Meanwhile, legislators receiving significant political donations from Big Cannabis, have accepted the narrative that hemp is a drug and must be regulated like one. This is having significant unintended consequences for the non-intoxicating sectors in the hemp industry including those involving grains for animal and human consumption as well as hemp fiber used in industrial applications. Based on data from a National Hemp Survey conducted by my firm, Whitney Economics, the revenue impact in 2021 alone was estimated to be between $20 billion and $25 billion. Keep in mind that the impact estimated in 2021 for hemp is larger than the entire legal cannabis market in 2020. The Big Cannabis narrative is so pervasive that it is scaring off would be investors that are needed to expand the fiber and grain infrastructure, product manufacturing and industrial applications sectors.

False Big Cannabis Narrative: Hemp Is A Drug & Cultivators Are A Front For Human Traffickers And Cartels
This narrative, which first started in Oregon, is now pervasive throughout the country. It has been explicitly mentioned by legislators in California, Oregon, Colorado, Hawaii and Oklahoma. While there have been bad actors cultivating illicit cannabis, in order for the narrative to be true, one would have to believe that every cultivator of hemp is illegally growing marijuana, and that all of the illicit supply is coming from hemp cultivators. Oregon legislators have stated as much in public meetings. Yet, this could not be farther from the truth.

The Numbers Don’t Add Up: In reality, the data does not support the narrative presented by Big Cannabis. For example, based on a recent U.S. Cannabis Supply Report (published by Whitney Economics), Oregon exports nearly 3.2 million pounds of illicit cannabis each year to other state markets. This is being misattributed to indoor hemp farmers. For the narrative presented by Big Cannabis to be true, the 1% of Oregon hemp acreage that is under coverage would have to produce roughly 38,000 pounds of cannabis per acre. At some point, legislators will have to realize this is a false narrative and that they have been duped by dope (Big Cannabis). In reality, illicit cannabis cultivation is a result of illicit actors, and not the result of the small number of remaining hemp operators.

Duping Regulators and Legislators Is Costing the U.S. Hemp Industry Billions Each Year
Regulators who originally thought the legalization of hemp by the 2018 Farm Bill would result in the deployment of industrial products using hemp did not anticipate the deployment of cannabinoid products beyond CBD. It seems that regulators thought the federal legalization of hemp would result in “rope not dope” and as such are now looking to bring hemp products under the same regulatory umbrella as schedule 1 “marijuana,” without realizing the enormous unintended consequences that would result from this change. With bills now passed in roughly 20 states that restrict hemp products and hemp licensing, investment monies are beginning to dry up and farmers are no longer willing to apply for hemp licenses. As a result, year over year hemp acreage is trending to decline 60% in 2022 after declining 56% in 2021. Product manufacturers that are looking for hemp fiber to support the hemp-based automotive, plastics, construction and textiles industries are competing for the limited supply of U.S. based hemp fiber. Manufacturers are resorting to importing fiber from Canada, China and France, which adds millions of dollars of cost onto the hemp licensees. More importantly, it cedes an important leadership role in the global hemp industry, which could easily belong to the United States.

The Heavy Impact Of Oversupply And Regulatory Murkiness On Cannabis.
In Oregon, which was once one of the largest producers of hemp in the country, oversupply combined with regulatory murkiness associated with this false narrative has decimated the industry, reducing the value of the capacity by $5.5 billion over a 2-year period. Many farmers are finding the business environment unfriendly now that laws have been passed to invoke a moratorium on the licensing of new acres. As of the date of this article, Oregon applications for hemp licenses have declined by over 75% since last year alone.

Trade Associations, Big Cannabis And The Attempts To Collude Against Hemp
When asked in a recent text message to opine on a policy position on using hemp as a test case to expand the cannabis market potential, a board member of Oregon-based trade association expressed their intentions very explicitly, to the author: “I will never support a competing industry of intoxicating products.” Later, this individual added, “…the industry is united now under one association and we are united in nonsupport.” These cabal-like tactics are becoming more common-place throughout the U.S. With so many so-called hemp advocates being influenced and funded by Big Cannabis, even the mention of cannabis working together with hemp is taboo. How is it that a cannabis industry that has fought so hard for equity and inclusion would go to such great lengths to suppress opportunities for others?

“The Ninth Circuit Court of Appeals recently ruled that products containing Delta-8 THC are generally legal because they are hemp derived products and federal law defines hemp as “any part of” the cannabis plant, including “all derivatives, extracts, [and] cannabinoids,” containing less than 0.3% Delta-9 THC by weight.” (May 19, 2022, 9th circuit court)

Hemp Based Intoxicants Can Be Regulated Without Being Treated Like A Schedule 1 Drug
In May of 2022, the 9th circuit ruled that hemp-based intoxicants are legal products. Before this point, the DEA announced that hemp-based products are legal. Yet, with continued regulatory murkiness at the federal level, and particularly at the FDA, states have felt some pressure to enact legislation that treats hemp-based cannabinoids like a schedule 1 drug. A state-by-state patchwork of laws is making it increasingly difficult to conduct basic interstate commerce. It essentially is recriminalizing hemp, despite its federal legality. However, regulating hemp-based intoxicants in the same manner as alcohol and cigarettes would conceivably address the public safety aspect of keeping intoxicants out of the hands of minors while still allowing access to the marketplace.

Despite the attempts of Big Cannabis to block hemp in state marketplaces, non-dispensary regulated intoxicating hemp programs have been propagated in multiple states, most recently in Minnesota, Utah, Colorado, Louisiana, Alaska and New York. It is necessary to point out that there are successful models on how to regulate hemp-based intoxicants outside of a schedule 1 system.

The Big Dupe Works To Limit Market Potential For Adult-use And Medical Cannabis Industries
In an analysis of the economic impact of legalization of cannabis in Indiana, Whitney Economics examined multiple models associated with consumer illicit to legal conversions. Holding regulatory structures constant, the rate of illicit to legal conversion comes down to two main issues: access and price. By allowing for widespread distribution outside of the traditional dispensary systems, states can quickly eliminate a majority of the illicit supply, disrupt illicit supply chains and generate significant tax revenues. In doing so, states would have the opportunity to address one of the major concerns of legal operators and regulators: the Illicit cannabis market.

This Two-System Approach Is Not Working
Regulating hemp at the farm gate while regulating cannabis as a schedule 1 drug is simply not working. An issue of this magnitude takes more than a patchwork of state laws to address. There will continue to be conflict. However, with so much cannabis being sold out of the back doors of licensed cannabis operators, defining hemp as a drug and perpetuating the myth about public safety is ripe with hypocrisy. While there are examples of bad actors and bad behavior in both sectors, this is not the answer. The suppression of trade and access to markets is entirely inappropriate treatment of a legally viable agricultural crop. The damage that has already impacted the hemp fiber and grain industries is hurting U.S. farmers’ global competitiveness, just as markets for hemp fiber and grain are opening up.

Just Be Honest: Cooler Heads Must Prevail And Data Must Inform Decision Makers
Many cannabis and hemp operators have conflicts of interest. The debate about hemp policy must be based on the merits and not on a false narrative and public safety hysteria that are shared behind closed doors to support one’s self interest. Until there is an open and transparent dialog, U.S. hemp farmers will continue to lose billions of dollars each year at home, and lose their opportunity for global leadership abroad. It is time for legislators and policy makers to stop being Duped by Big Dope, understand the conflicts of interest, have a data-driven debate, and deploy policies that are supportive of the legal, agricultural industry. The time is now, and action must take place not before it is too late.

Beau Whitney is the founder and chief economist at Whitney Economics. He is also the CEO of EVERY DAY HEMP COMPANY, a fiber-based hemp plastic company.