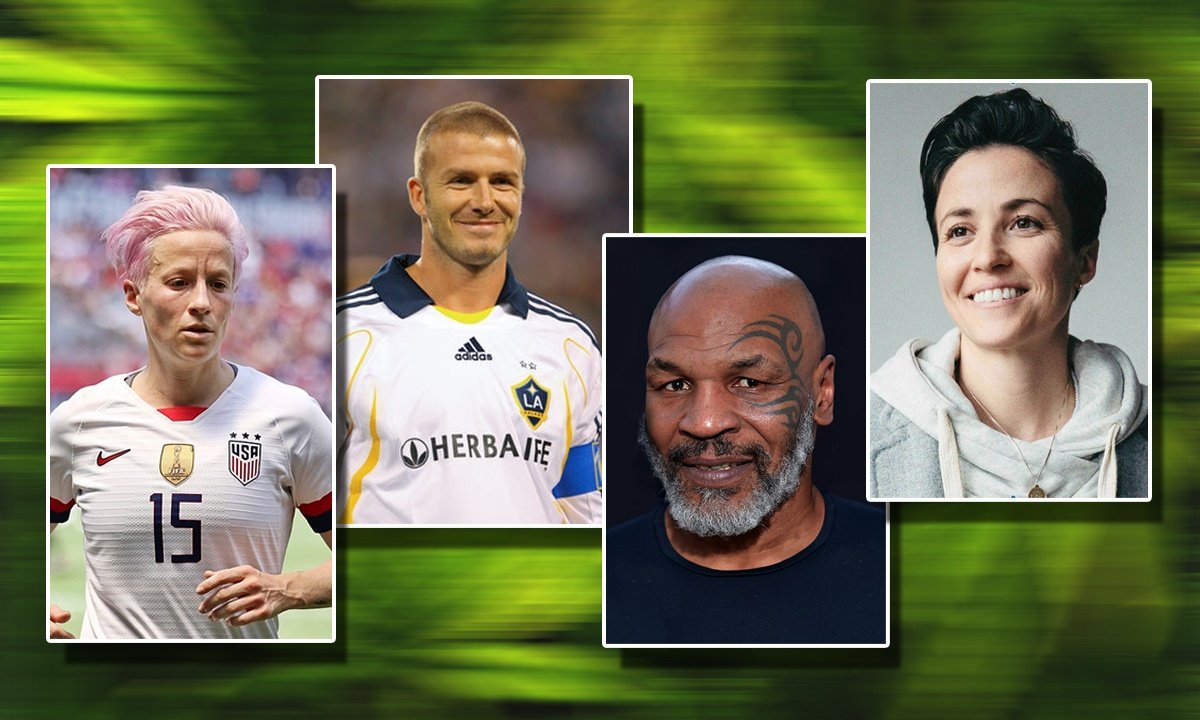 Professional athletes and entertainers at the highest level are some of the biggest fans of CBD. Many have become users of CBD products and outspoken advocates, touting the hemp extract’s reported benefits related to recovery, the stresses of travel, and other unique physical and mental demands of performing at the top of their game.

And while CBD may be beneficial for many in pro sports and entertainment, in turn, it seems athletes and performers are good for the business of CBD. In fact, a growing number of these individuals have taken take more than a passing interest in CBD; they’ve actually gotten involved in the business of CBD and hemp-derived cannabinoids, either as an investor, founder or spokesperson.

And given their stature in popular culture, acceptance and endorsement by famous athletes and performers goes a long way to help popularize CBD products in the mainstream.

From the recent announcement that Delta-8 manufacturer 3Chi is a product sponsor of NASCAR and the Daytona 500, and Mike Tyson’s line of cannabis and CBD products for emotional and physical relief, to Olympic soccer star Megan Rapinoe’s and twin sister Rachael’s Mendi Co., and CBD enthusiast Beyoncé’s announcement that she was building a hemp farm, in the past year alone dozens of athletes and entertainers have been in the news for their involvement in the business of hemp and hemp-derived CBD.

Here are some highlights.

3Chi Becomes a Primary Sponsor of NASCAR
Delta-8 manufacturer 3Chi announced in January 2022 that it will be a primary sponsor of Richard Childress Racing, Tyler Reddick and the No. 8 NASCAR Cup Series team in 2022. The partnership is significant as it marks the first category-specific team partnership in NASCAR and one of the first hemp-based consumer brand sponsorships across major professional sports. The partnership will kick off with the DAYTONA 500 at Daytona International Speedway on Sunday, February 20.

Mike Tyson Launches Tyson 2.0 Cannabis and CBD Line
Former heavyweight boxing champion Mike Tyson is a well-known fan of cannabis, and in November 2021, Tyson released his own Tyson 2.0 cannabis and CBD line. Through partnerships with select growers, the makers of Tyson 2.0 say it brings you a ‘Better CBD product’ in every single package. “Our commitment to the plant and exotic genetics ensures that we deliver clean, quality, premium CBD products with every purchase. The former heavyweight champ, famous for delivering a knockout punch, has been selling cannabis products since 2016 through his Tyson Holistic label,” the company said.

Soccer Star Twins Megan and Rachael Rapinoe Pour Their Passion into Mendi
Megan and Rachael Rapinoe may be synonymous with soccer, but they are quickly emerging as leaders in the CBD market, reported Out Front Magazine in August 2021. Retiring from soccer and pursuing a career in health and fitness, Rachael helped launch Mendi in 2019, an athlete-built cannabis brand that provides all-natural solutions for sports and athletic performance recovery with hemp-derived, CBD products. Mendi grew out of the sisters’ shared passion to improve the lives of athletes using the untapped potential of Mother Nature’s best ingredients. Sister Rachael runs the business, and as Mendi’s official athlete brand ambassador, Megan is a long-time proponent of using CBD for recovery.

John Isner First in Pro Tennis to Endorse a CBD Product
In 2019, when John Isner became the first professional tennis player to endorse a CBD product—an energy drink called Defy—the reaction was what you might expect within the conservative, tradition-laden sport: confusion, perhaps even mild scorn. At the time, CBD, billed as a treatment for pain and inflammation, was more niche than novel, reported Tennis.com in May 2021. For Isner, a former world No. 8 and longtime American No. 1, partnering with Defy was for more than a paycheck; he’s a fan of the company’s products and their impacts, Tennis.com reported.

CBD On Par to Help Pro Golfer Bubba Watson and Others
Two-time Masters champion and 12-time PGA Tour winner Bubba Watson in 2019 announced a multi-year sponsorship with cbdMD in which the pro golfer sports the cbdMD logo on both sides of his visor at PGA events. The partnership was announced less than two months after the PGA Tour reportedly issued a warning to its players about CBD use on the tour, reported Golf Magazine. According to a May 2020 New York Times report, 2014 FedEx Cup champion and five-time PGA Tour winner Billy Horschel went six months without a top-eight finish before “he found a remedy for his ailing golf game from a surprising source: the hemp plant.” Once Horschel started using CBD in 2019, the New York Times reported that he had four top-eight finishes in the next four months and “was playing some of the most consistent golf of his career.” In 2020, Horschel became an investor, along with renowned race car driver Danica Patrick, in Beam, a wellness CBD brand. In partnering with Beam, Horschel joined Bubba Watson and Scott McCarron, winner of the Schwab Cup on the Champions Tour, who are paid endorsers of CBD products. “Their advocacy would appear to signal a growing acceptance of CBD use in the conservative world of professional golf,” the Times reported.

U.K.’s Love Hemp Sponsors UFC Professional Mixed Martial Arts Organization
In March 2021, Love Hemp, one of the U.K.’s leading CBD product brands, announced a five-year agreement naming Love Hemp as the Official Global CBD Partner of UFC. According to the company, Love Hemp will have numerous branded integrations within UFC content on digital platforms, including social media assets and programming on UFC FIGHT PASS, the world’s leading streaming service for combat sports. Love Hemp branding will also be prominently integrated into the UFC Performance Institute, further signaling to athletes that UFC wants to play a prominent role in helping to educate them on CBD use and the role it plays in athlete health and injury recovery, the company said.

Entertainers Take a Star Turn in CBD
Pro athletes aren’t the only ones who perform in physically, mentally and emotionally demanding circumstances. Many entertainers, dancers, musicians, actors and other types of performers have embraced CBD not only for their own health, but some also have gotten involved in the business, including: Jane Fonda is hot on hemp; E-Street Band member Steven Van Zandt launched his own CBD line; Beyoncé is going so far as to build her own hemp farm; actor/comedian Tommy Chong partnered with Alpinols to launch a CBD line (of course!); Martha Stewart launched a CBD line in partnership with Canopy Growth; actor Kristen Bell launched Happy Dance CBD products; country music star Wynonna Judd jumped about the CBD business bandwagon; supermodel Kathy Ireland has her own CBD brand; and musicians Travis Barker, John Legend and others are backing CBD companies, as well.