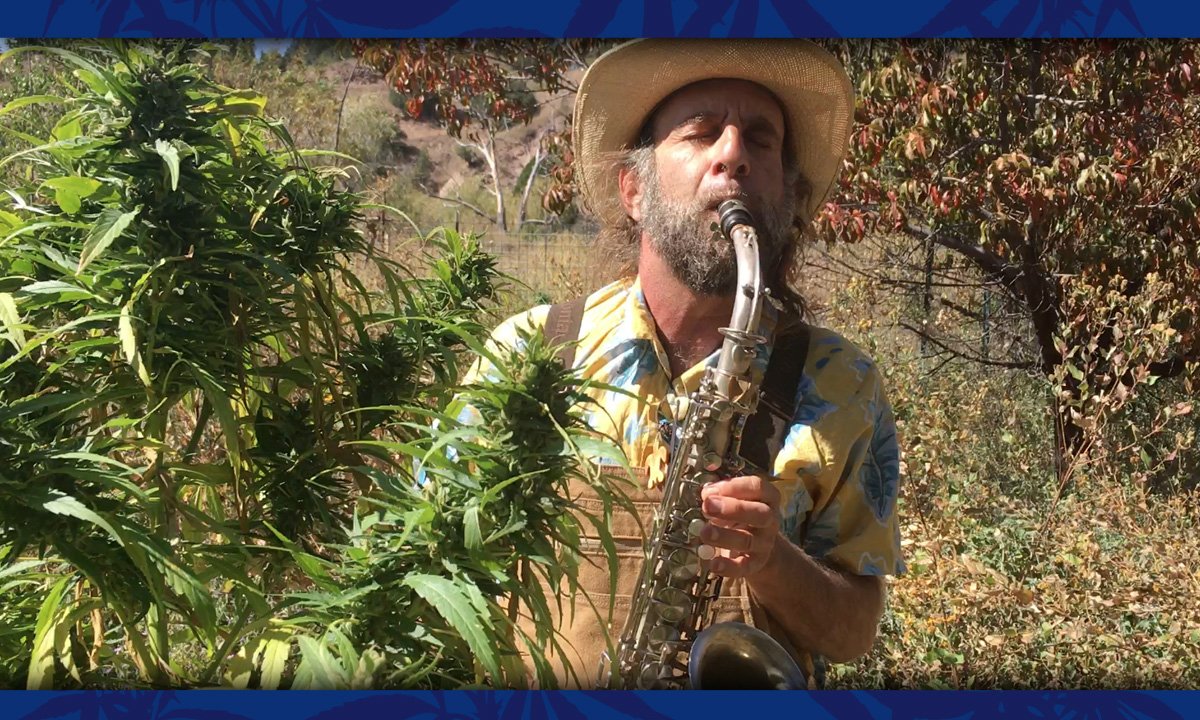 Editor’s Note:  It’s been a busy year for nationally renowned hemp farmer and best-selling author Doug Fine, with appearances at SXSW and on C-SPAN. But when you talk to Doug, the first thing on his mind is the importance of  “seeking out independent regenerative farmers in your region — at farmer’s markets, organic food co-ops and CSAs. The win-win,” Fine said, is, “regenerative farm-to-table enterprises generally produce the highest quality hemp — this is an entrepreneurial advantage over fungible ‘McHemp.’”

Let’s Talk Hemp recently caught up with Doug, who shared that this season’s hemp crop is getting quite fragrant on his Funky Butte Ranch in New Mexico, even as his family and farm survived yet another massive wildfire without evacuation — barely.

“This year, it was a 350,000-acre wildfire that halted eight miles away from the Funky Butte Ranch when the rains came,” Doug said. “Another close call on the front lines of climate change has me even more fired up, so to speak, about climate change… and how hemp farmers can have an impact on farm policy.”

For Doug, climate change mitigation is part of everyone’s entrepreneurialism, “if we’re interested in humanity having a habitable planet.” Also, with the 2023 Farm Bill on the horizon, discussion has already started on needed changes to federal hemp policy. Here, too, Doug shared what he (and frankly, what thousands of heartland farmers) believes are the three most urgent tweaks to get implemented into federal law in the new Farm Bill.

The Southern Hemp Expo (SHE) welcomes back regenerative hemp farmer and author Doug Fine as opening keynote speaker and Emcee of the Let’s Talk Hemp Agriculture and Soil Science Symposium on Saturday, Aug. 20, 2022 in Nashville, TN. Doug’s keynote at SHE this year is titled, “Elevating Farmers: What You, I and Anyone Can Do To Mitigate Climate Change While Building or Supporting a Farm-To-Table Enterprise.”

Hemp Is a Solution to Climate Change
In 2013, a bear fleeing a wildfire in our New Mexico backyard killed nearly all of my family’s goats in front of our eyes. It wasn’t the bear’s fault; he was a climate refugee. It was June, and drought had weakened the ponderosa pines and Douglas fir surrounding our remote Funky Butte Ranch. Beetles took advantage, and all of New Mexico was a tinderbox. Ho hum, just another climate event that until recently would have been called a “millennial” fire. The blaze cut a 130,000-acre swath that year, poisoning the air before the monsoon finally arrived about half a day before we would’ve had to evacuate. But it was too late for the large juvenile black bear, who’d lost his home and his mind. He didn’t even really eat most of the goats.

We lost all but one of the animals that provided our milk, yogurt, and ice cream. Baby Taylor Swift survived, but Bette Midler, Stevie Nicks, and Natalie Merchant (who loved meditating with me of a morning) perished, as did the bear several weeks later, care of a Game & Fish marksman, upon going after a dozen of our neighbor’s sheep. (As you might already have discerned, all our Funky Butte Ranch goats are named after singers we like, but whose voices might tend toward the caprine.)

Ever since, we’ve had to keep a constant eye on our human and goat kids. We react like a frenzied SWAT team to any unusual noise up in the eponymous buttes above our small adobe ranch house. We’ve had our climate change Pearl Harbor—the event that shifted us into a single-minded new normal. If you haven’t had yours yet, you probably soon will. Might be landslide, might be supply chain disruption. I sure hope it doesn’t happen. But personally, I aim to be ready, by cultivating superfood.

This is the paramount reason I’m an overworked employee of the hemp plant: The people I care about most are one blaze away from joining the world’s 20 million climate refugees. At least I get the pleasure of putting “goat sitter” under occupation on my tax form.

There’s nothing like wildfire-fleeing bears attacking your livestock before breakfast to hammer home the fact that humanity is in the bottom of the ninth inning with two outs. The conflagration convinced me that I had to do something, personally, to work on this climate change problem. After some research about carbon sequestration through soil building, it became clear that planting as much regenerative hemp as possible was the best way to actively mitigate climate change and help restore normal rainfall cycles to our ecosystem.

Three Ways to Improve the 2023 Farm Bill for Hemp Farmers
As a permitted hemp farmer since 2016, current federal policy, while well-intentioned and not a bad start, is in urgent need of upgrade in three key areas. The proof is in the number of hemp farmers: Just two seasons ago we had nearly 400 hemp farmers in New Mexico. This year, I registered fairly late and got permit number 11. If the troubling news is that elements of policy are costing jobs as well as the amount of hemp superfood production, the good news is I believe folks at the USDA and in Congress want to listen to farmers.

Unsurprisingly, given most of my goats getting killed in front of my eyes and the fact that I had witnessed the immediately cooling, moistening impact of a hemp field in the midst of a massive fire, my motivation here is both empowering independent farmers and mitigating climate change through regenerative farming techniques. Here are three policy elements which, if implemented in the upcoming Farm Bill, I strongly feel will significantly help increase U.S. hemp acreage:

Why:
– Nearly all farmers I’ve met support the change (some think 1% Delta-9 THC isn’t high enough, but we have to start somewhere).
– Nearly 40% of tests have gone “hot” (above the current, arbitrary .3% level) in some states during some years.
– The vast majority of hot tests under current rule are under 1%.
– At 1% we would allow U.S. farmers to join farmers in an increasing list of countries including Thailand, Switzerland, Ecuador, and Mexico.
– The two major farmer groups including the Farm Bureau support this crucial policy update; in fact, the National Farmers Union would like to see 3% (not point three).
– There is no danger of confusing hemp with psychoactive cannabis: dispensaries start at 15% THC and even that is low.

Why:
– No one is selling seeded flower on the black market.
– We must support superfood and fiber farming at scale by making it as easy as possible to cultivate dioecious hemp.
– Dioecious cultivation at scale is a potentially impactful mode for sequestering massive amounts of carbon; according to Darshil Shah, a researcher at Cambridge University, quoted in the forthcoming book, Sundressed by Lucianne Tonti, one acre of industrial hemp can absorb 5-7 tons of CO2.

Why:
– This was George Washington’s favorite crop. At the 2018 hemp harvest I was filming at Mount Vernon (the first at General Washington’s Estate in 200 years), I asked Mount Vernon’s then-Interpretive Program Supervisor Deborah Colburn what George Washington would think to learn that hemp had been banned for a lifetime. Without hesitating, she told me (on-camera, for my forthcoming American Hemp Farmer TV show), “He’d think that was a crime.”
– Multiple farmers I know have refused to submit to this outrage; It is as absurd to demand background checks on hemp farmers as it is tomato farmers.
– Senator Mitch McConnell promised a “lightly regulated” hemp industry five years ago and it’s time to make that promise a reality. Under current policy. farmers who are taking a risk to switch from soil- and gut-damaging GMO corn, soy, wheat or cotton, are threatened with crop destruction and burdened with worries about their production process going hot. With all cannabis legal for a majority of Americans, it is time to reduce regulatory burdens for the hemp farmers who are trying to sequester carbon and grow healthy crops and products. I know I eat hemp every day, wear it most days, and use it to build soil in my work.

Personally, I very much believe that If we’re wise as humans, we’ll endeavor to help ensure that millions more acres of hemp are cultivated with less regulation, for two main reasons: 1) I want more freedom. No one should be inspecting my garden. It’s no one’s business what I grow. 2) I’m working on climate mitigation — nurturing soil is one of my main jobs in this life. The fact that life as a regenerative polyculture farmer is the most fun you can have outside the bedroom is simply a plus.

See you at the Southern Hemp Expo.

About Doug Fine
Doug Fine is a regenerative hemp farmer, goat herder and author of best selling books including American Hemp Farmer, Hemp Bound, and Too High to Fail. His latest book, American Hemp Farmer, was nominated for the Santa Fe Reporter’s 2021 Book of the Year award. His focus for the past 15 years has been regenerative living for regular folks, beginning with his Boston Globe bestseller Farewell, My Subaru. Most recently, Doug has cultivated hemp superfood for farm-to-table products and seed-building in six U.S. states, and his own hemp seeds have been used to clean soil in a New Mexico study. Willie Nelson calls Doug’s work “a blueprint for the America of the future.” The Washington Post says, “Fine is a storyteller in the mold of Douglas Adams.” A website of Conan and Tonight Show appearances, TED Talk and online regenerative hemp course is at dougfine.com — His global work from Rwanda, Guatemala and Alaska has appeared in the New York Times Magazine, the Washington Post, Wired, Esquire and the Los Angeles Times, and, he was a long-time correspondent for National Public Radio from five continents. Twitter and Instagram: @organiccowboy

You can get your tickets for the Southern Hemp Expo at SouthernHempExpo.com.

A Farmer-Friendly Carbon Credit Model is Needed for the Hemp Industry
Making a Difference: The Hemp Cooperative Ireland