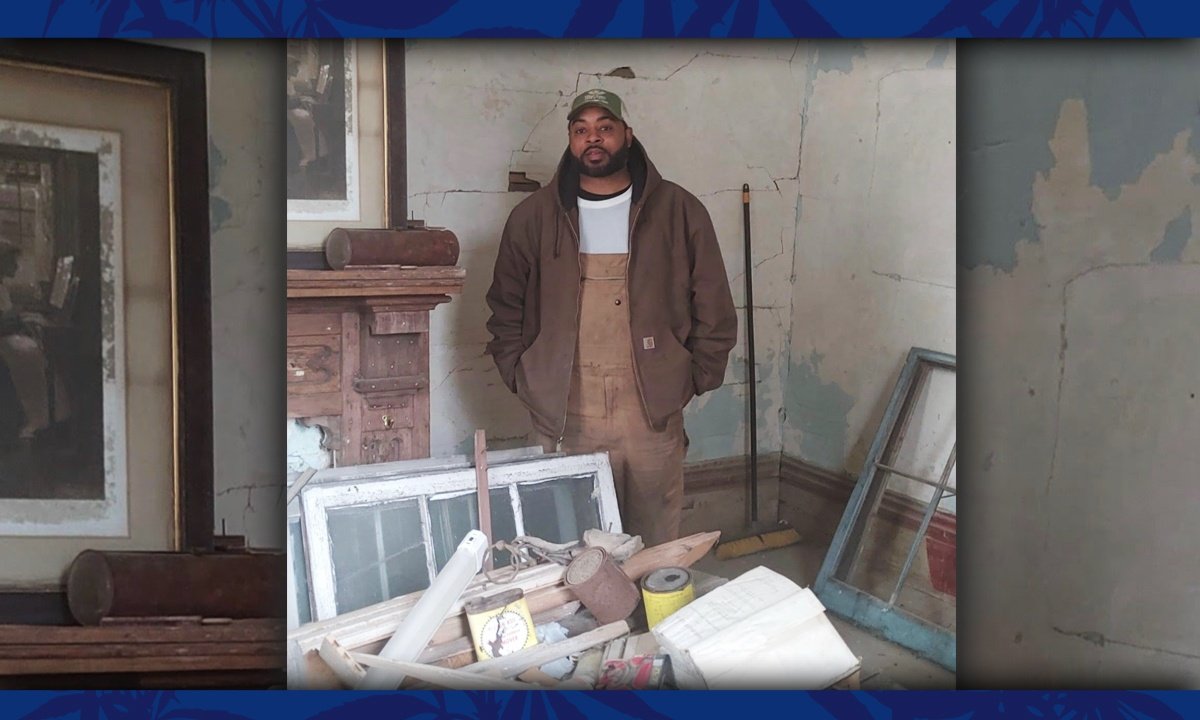 Patrick “Rick” Brown stands in the Oakley Grove Plantation home in Littleton, NC, which will become an agritourism center for Hempfinity and Brown Family Farms. Photo courtesy of Patrick Brown.

In the Carolinas, the former epicenter of the textile industry in the United States, Black-owned hemp farms are switching over to growing fiber from cannabinoids for the 2022 season, hoping to create the beginnings of a new textile market and regional economic growth.

Patrick “Rick” Brown, plans to grow 250 acres for fiber this year at the Hempfinity hemp farm on a fourth-generation family property in Warren County, NC.

Already, Hempfinity – as a grower of textile-suitable hemp – has been in talks with clothing giant Patagonia, even though the U.S. natural fiber textile supply chain is still underdeveloped.

U.S.-grown hemp can help the local cotton industry expand to hemp-blend textiles sought by consumers while allowing American corporations in the textile industry to,“say their products are made in the United States,” Brown told Let’s Talk Hemp.

“Our town had a thriving [textile] industry in the 70s. Today our county is underprivileged and deprived and most people earn less than $13 an hour.”

Hempfinity runs alongside the Brown Family Farms, a regenerative produce operation selling vegetables and fruit to restaurants, schools, CSA customers, grocery stores and churches. Hemp was added in 2017 as a way to transition from tobacco, Brown said.

With local roots dating back to the end of the U.S. Civil War, the farm and family is part of the history of Warren County and the region.

Five generations earlier, Lucinda Fain, the matriarch of the Brown clan, was sold into chattel slavery at 17 in Virginia and brought to serve as a cook on the 7,000-acre Oakley Grove Plantation as one of 185 enslaved workers owned by the Faulcon-Browne family. Lucinda raised seven children fathered by the white plantation owner, Jacob Faulcon-Browne.

According to family letters and legends, her light-skinned oldest son Byron, was being groomed to become an overseer when in 1865, the forces of history intervened.

Told the Civil War was over, Byron escaped from the plantation and found work nearby. Byron Brown and his descendants acquired nearby land and amassed hundreds of acres in the area and farmed until Bryon’s death in 1931. The farm was passed down to the late Grover Brown, and then to Rev. Dr. Arthur Brown, now 94, and finally to Rick.

This fall, the Brown family bought the Oakley Grove Plantation house, a three-story Italianate mansion in Littleton, NC, listed in the National Register of Historic Places. Brown is remodeling the home.

“The purchase of the plantation is to add an agritourism venture to our already existing portfolio,” Brown said.

Even so, farming is a side hustle for Brown, who received a degree in business administration from Fayetteville State University and works for the federal government as a contractor.

“I’ll always say, don’t quit your day job in order to farm. You know, you want to set yourself up with a five to 10 year plan, which is what I’ve done,” he said.

U.S. Hemp’s Slavery Past
Hemp’s history in the United States for African Americans was enmeshed with human enslavement because of the dirty and difficult work of hand-processing the plant’s fibers for use in textiles, rope and paper.

Even while U.S. Founding Fathers George Washington and Thomas Jefferson grew hemp and encouraged others to do so, the crops were processed by enslaved workers. After the Civil War, U.S. hemp production fell, particularly in states like Kentucky, which depended on an enslaved-labor force.

The history of Black farming in the United states is rife with “systemic land theft,” Hishaw told Let’s Talk Hemp. Unclear family succession plans, back taxes, medicare liens and dishonest dealing have stolen land from many small farmers, including her own grandfather who lost his Oklahoma farm to an unpaid tax lien.

The 2019 CBD wave generated a slew of small farmers who came to her for help after signing contracts with unscrupulous hemp startups from the United Kingdom, California, Colorado and New York.

“About 20 black farm families with generational land lost ownership – lost the land – because of these bad hemp contracts,” she said.

For many small-acreage farmers, Black and white, contracting for hemp production during the CBD boom was the first crop they grew that did not have the safety of federal crop insurance coverage and the crop was not covered by federal government subsidies. When hemp processors went under, reneging on contracts, farmers were left with unsellable biomass rotting in their barns, Hishaw said.

Today, Black-owned farms in the United States comprise a very small percentage of total agricultural producers, less than 2%, according to the 2017 USDA Agriculture Census.

The average yearly income in the United States from agriculture for Black farmers is around $2,500, Hishaw said, and the average age of Black farmers is in their 70s. About 30,000 acres of Black-owned land is lost per year, partially because almost 70 percent of African Americans die without a will, Hishaw said.

“When you’re discussing land and property and generational wealth, you have to have proper estate planning, even if you [only] own a house,” she added.

Some states have passed laws banning forced-partition sales of family land without giving heirs the rights of first refusal, she said. These and other patchwork protections have helped African American farmers hold onto family land.

Second-Career Family Legacy
But for U.S. Black farmers, hemp has been an adventure, and a second career.

Retired pharmacist Cynthia Moorman and her mother Ida Cameron, now in her 90s, of Sanford, NC, attended a 2019 hemp conference in Asheville, NC to hear about how hemp could replace tobacco on their family agricultural land.

“People have been so helpful, but you’ve got to start small,” Moorman said.

But with a new fiber nonwoven plant opening nearby in Lumberton, NC, the Cameron family sees an opportunity for growing fiber strains in the future, especially if fiber processing is finally available.

Byron Cameron said. “So the CBD actually came kind of second for us.“

Byron’s background in television and his sister’s pharmacy background have reinforced the importance of professional organizations, including the Southeast Hemp Association and Women in Hemp.

“Whatever industry you’re in, you have to join the associations,” Byron Cameron advised.

From Logging to Hemp
In 2019, entrepreneur, math teacher and entertainment producer Derick Muhammad returned from Dallas to his hometown of Estill, SC, (pop. 2,400)  to start Bossville Farms, a hemp operation on family land formerly farmed for the logging industry for 70 years.

“My grandfather used to say the biggest lie ever told was ‘money doesn’t grow on trees,’ because that’s how he made his fortune and amassed about 5,000 acres,” Muhammad told Let’s Talk Hemp.

But Muhammad was fascinated with the promises of hemp, not just the cannabinoid uses, but the industrial uses – particularly for fiber that could replace trees in so many applications.

“Keeping the trees in the ground stabilizes the environment, and it’s going to help us with global warming and flooding,” he said. “Some of the natural disasters that we’re experiencing come directly from taking the trees out of the ground.”

Returning to his small-town roots to plant cannabis plants caused controversy, he admits. But to educate his neighbors and relatives and break the stigma, Bossville Farms hosts a “4/20 planting party” every year – even winning over his old high school athletic director.

The company will plant 100 acres for grain and fiber this year, he said.

But Muhammad’s real interest is in processing, and his dream is to open a decortication facility. Bossville is currently raising funds for a $1 million machine and purchase of a local building that they believe will suit their needs.

“[Our family] probably was one of the biggest suppliers of logs to the mill in the low country. But my grandfather’s dream was owning the mill, and he never achieved that,” Muhammad said. “Owning that [hemp] mill and supplying the raw materials to whoever needs them is my goal.”