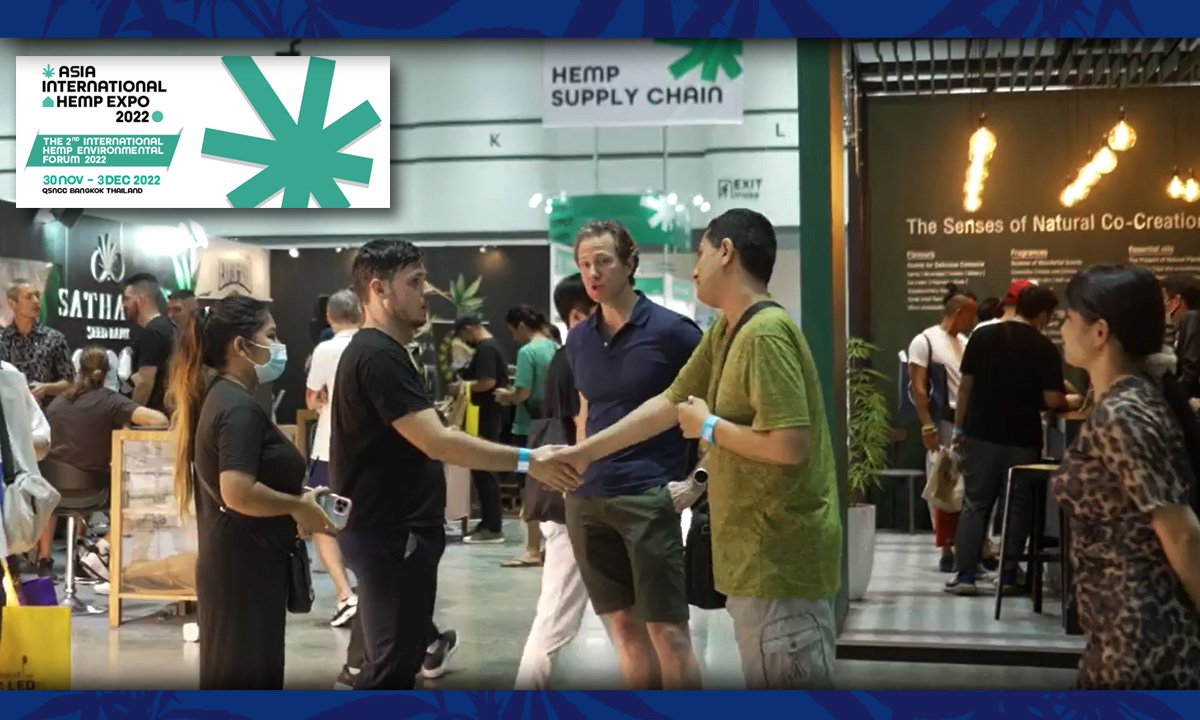 In June 2022, Thailand made history as the first Asian nation to decriminalize cannabis. Seemingly overnight, an entire industry emerged from the shadows into the light. While the sheer multitude of dispensaries lining city streets is enough to deem Thailand the cannabis capital of Asia, the first-of-its-kind Asia International Hemp Expo drove home the true potential of Thailand to emerge as a global leader in hemp.

From November 30 through December 3, 2022, a community of over 5,000 gathered in Bangkok to explore Thailand’s burgeoning hemp and cannabis industries. The event, organized by NEO (N.C.C. Exhibition Organizer Co., Ltd.) at the newly renovated Queen Sirikit National Convention Center, boasted over 200 exhibitors and a huge range of SKUS and prototypes on display. Between THC-containing genetics and dried flower to hemp-based biocomposites and construction materials, there was something for everyone.

While the Thai Industrial Hemp Trade Association (TIHTA) officially endorsed the event in partnership with the Japan Hemp Association, a variety of national associations and trade groups were present, suggesting the overall openness of Thai businesses to integrate the plant into well-established industries, from massage and traditional medicine clinics to textile and auto part factories. The presence of international exhibitors, from the United States to China, highlighted a strong global interest in Thailand’s nascent cannabis and hemp industries as well.

On the first two days, behind the impressive, 10,000-square-meter expo hall, two conference rooms hosted the International Hemp Environmental Forum (IHEF). During the forum’s opening ceremony, Anutin Charnvirakul, deputy prime minister and minister of public health, delivered a powerful keynote where he expressed his unwavering support for the industry, citing its “endless opportunities” for the environment, health and the economy. Summarizing this point, he concluded, “There’s no wealth without good health, and sometimes the two can combine.”

Alongside the government’s enthusiasm for hemp comes a royal blessing from Her Majesty Queen Sirikit, “mother of hemp fiber,” to whom the event was dedicated. Thailand’s beloved queen, who turned 90 this year, has been an outspoken advocate for hemp since the 1990s, when she visited hill tribe villages in northern Thailand and witnessed hemp’s cultural significance in traditional weaving.

Weerachai Nanakorn, honorary chairman of TIHTA and former botanist for the royal family, shared from his firsthand experience with Her Majesty how she identified hemp as an economic crop and pioneered the research and development of hemp in Thailand. He predicts that, in the future, “a big blanket of hemp” will grow across the country. Thanks to the abundance of agricultural universities and their well-developed communication networks with farmers, this vision can easily become a reality; however, like everywhere else in the world that’s developing a new hemp industry, many challenges remain.

For all categories of the plant, the needs start with stable genetics and proper growing practices. Holding protection of landrace strains paramount, structured coordination between growers of hemp and high-THC cannabis alike can mitigate adverse effects of cross-pollination.

Proper testing is vital, starting with soil and ending with plant material. In the case of cannabinoids, much of what’s being sold in dispensaries as “medical” may actually be doing more harm than good due to the absence of testing facilities. Regulations are needed to protect consumer safety, but they must also support an open and inclusive industry. Alan Dronkers of Sensi Seeds, HempFlax and adviser to Thailand’s Ministry of Agriculture, said it best during the IHEF: “To whom does this plant belong? To all of us. Not to a company or a person.”

The industrial hemp sector requires investment in large-scale decortication facilities, while high-grade dehulling machinery is needed to evolve hempseed as an ingredient. Simultaneously, public education and R&D must proliferate to increase demand and supply high-quality end products to consumers. Initiatives from the Cannabis Entrepreneur Program, Cann Society, HempThai and TIHTA, among others, are already actively serving this mission with plenty of room for growth.

Massive achievements are needed to realize hemp’s potential in Thailand, but with a collective effort and the right incentive, everything is possible. Thailand happens to be a collectivist culture where teamwork comes easily. As hemp and cannabis pioneer Ben Dronkers said onstage: “Hemp will clean the soil and it will clean the air. So, hemp will save the world.” What could be a better incentive than saving the world?

With its strong agricultural foundation, the support of the royal family, the government, research institutions and private enterprise, and a long-held tradition of working with natural materials and herbal medicine, Thailand is in a unique position to utilize hemp’s diverse properties to build a truly circular economy. If the effort is properly executed, the nation can serve as a model for the rest of the world to follow in an effort to meet the SDGs and create a better life on planet Earth.